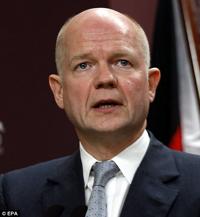 I have found that I get a better reaction from people once I am less bothered about their reaction.
Let's not be afraid to speak the common sense truth: you can't have high standards without good discipline.
Inspiring scenes of people taking the future of their countries into their own hands will ignite greater demands for good governance and political reform elsewhere in the world, including in Asia and in Africa.
I'm going to reduce the size of the Cabinet, cut the number of ministers, reduce the size of the House of Commons, campaign for a European Parliament with 100 fewer members, halve the number of political advisers, and abolish a huge swathe of Labour's regional bureaucracies and agencies and their offices in Brussels.
We have to face the reality of climate change. It is arguably the biggest threat we are facing today.
Governments that block the aspirations of their people, that steal or are corrupt, that oppress and torture or that deny freedom of expression and human rights should bear in mind that they will find it increasingly hard to escape the judgement of their own people, or where warranted, the reach of international law.
When we have a Deputy Prime Minister who tells people not to drive cars but has two Jags himself, and where the Minister who tells people not to have two homes turns out to have nine himself no wonder the public believe politicians are hypocrites.
Time is not on Gaddafi's side. People ask about the exit strategy. It's Colonel Gaddafi who needs an exit strategy because this pressure will only mount and it will be intensified over the coming days and weeks.
There's only one growth strategy: work hard.
The EU should be concentrated on adapting to globalisation and global competitiveness, not building more powerful centralised institutions in Brussels.
To the teacher weighed down with paperwork, I say: you've been messed around too often. You came into teaching to spend your time teaching children not filling in forms.
Egypt is a sovereign nation.
The Bill of Rights was intended to secure freedom of speech - the freedom of speech of members of parliament to speak freely rather than be at threat of... the threat of an over powerful monarch at the time.
For the security of the UK, it matters a lot for Somalia to become a more stable place.
I think Britain would be alright, if only we had a different Government.
Well, if you're looking for me to lead a normal representative life, well good luck finding a foreign secretary who'd be like that - totally dependant on the political system and has never earned any money. Then you'll get the politicians you deserve.
People feel that the EU is a one-way process, a great machine that sucks up decision-making from national parliaments to the European level until everything is decided by the EU. That needs to change.
Yes, I've never inherited a penny!
Obviously a Conservative government will always leave taxes lower than they have been under Labour. Those things go with the territory of the Conservative Party.
I described the euro as a burning building with no exits and so it has proved for some of the countries in it.

Who is person today and how old is William Hague age, famous quotes