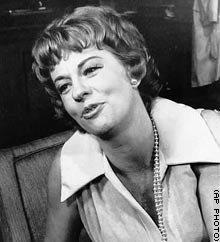 I'm a bad liar; I don't know what to say backstage.
We must overcome the notion that we must be regular... it robs you of the chance to be extraordinary and leads you to the mediocre.
Usually, someone who's in a show gets me a ticket. I feel cornered. I can't walk out if I don't like it.
I won't go to England because they won't let my dog in.
Once in awhile, there's stuff that makes me say, That's what theatre's about. It has to be a human event on the stage, and that doesn't happen very often.
I love going to the movies; I love watching good movie actors. They must know something I don't.
We were not allowed to say, Screw, but we could say, Hump the hostess, because hump is in Shakespeare.
If you want a bourgeois existence, you shouldn't be an actor. You're in the wrong profession.
I have disassociated myself from that book.
Working with Brando was fun. It was like a tennis match. We played unbelievably well together.
They still had the Lord Chamberlain, so we had this idiotic censorship. We were allowed three Jesus Christs instead of 10. Why three were OK, I don't know.
We had a relationship that lasted 44 years. Herbert and I lived together 10 years before we were married. He always gave me a little heart for whatever anniversary.
Awards don't really mean much.
I love playing Chekhov. That's the hardest; that's why I love it most.
I think, by and large, the level of acting is mediocre. When I go to the theatre, I get so angry. I don't go.
Marlon was so sensitive, you thought the poor guy just had a bad education.
Maybe the one I enjoyed playing most was A Month in the Country.

Who is person today and how old is Uta Hagen age, famous quotes