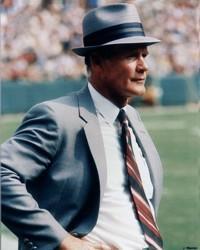 When you want to win a game, you have to teach. When you lose a game, you have to learn.
A winner never stops trying.
Football is an incredible game. Sometimes it's so incredible, it's unbelievable.
Leadership is getting someone to do what they don't want to do, to achieve what they want to achieve.
Setting a goal is not the main thing. It is deciding how you will go about achieving it and staying with that plan.
Leadership is a matter of having people look at you and gain confidence, seeing how you react. If you're in control, they're in control.
I've learned that something constructive comes from every defeat.
Today, you have 100% of your life left.
If you are prepared, you will be confident, and will do the job.
The secret to winning is constant, consistent management.
Right after the game, say as little as possible.
I don't believe in team motivation. I believe in getting a team prepared so it knows it will have the necessary confidence when it steps on a field and be prepared to play a good game.
Achievement builds character.
Being the best at whatever talent you have, that's what stimulates life.
Character is the ability of a person to see a positive end of things. This is the hope that a man of character has.
Confidence comes from knowing what you're doing. If you are prepared for something, you usually do it. If not, you usually fall flat on your face.
I just didn't want to leave the Cowboys when they were down. I at least wanted them to get into a respectable position before anyone else took over.
I know that life is really finding the right relationship between yourself and God.
I wouldn't think I would coach again, because it would just be hard not being in the Cowboys' blue.
I've come to the conclusion that players want to be treated alike.

Who is person today and how old is Tom Landry age, famous quotes