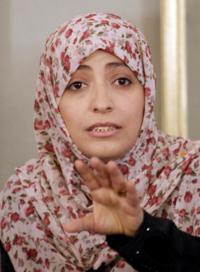 Peace does not mean just to stop wars, but also to stop oppression and injustice.
I know there is a bounty on my head, such as there is with many other leaders and protesters.
I discovered that wearing the veil is not suitable for a woman who wants to work in activism and the public domain. People need to see you, to associate and relate to you. It is not stated in my religion to wear the veil; it is a traditional practice, so I took it off.
The solution to women's issues can only be achieved in a free and democratic society in which human energy is liberated, the energy of both women and men together. Our civilization is called human civilization and is not attributed only to men or women.
Don't worry about Yemen. Yemen started in peace, and it will end its revolution in peace, and it will start its new civil state with peace.
I want a future where my children feel safe and appreciated and proud to be who they are. My heart is one with all the Arab Spring heroes, no matter how small they think their role is. I know they believe, like me, that we are working for a world whereby an Arab can live with the other in a respectful and dignified way.
Women were free in older times when the Islamic nation was strong. There are so many examples in history, not more than a thousand years ago, when Muslim women were leaders, scientists, professionals, and so on. It is all about justice, and justice can be attained through having the rulers accountable to their people.
Mankind's feeling of responsibility to create a decent life and make it worth living with dignity has always been stronger than the will to kill life.
With two civil wars, an al-Qaida presence and 40% unemployment, what else is President Saleh waiting for? He should leave office now.
I have always believed that resistance against repression and violence is possible without relying on similar repression and violence. I have always believed that human civilization is the fruit of the effort of both women and men.
I would like the world to know that Yemeni women are strong, and if empowered, they can achieve. The world needs to look beyond stereotypes and dress code. In our hearts, we are just human beings who want to live a dignified life. Is that too much to ask for?

Who is person today and how old is Tawakkol Karman age, famous quotes