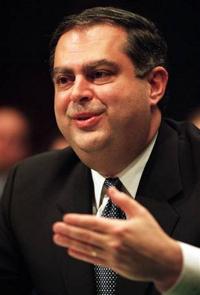 If you had a national grid with one operator, you had twenty or even a hundred operators, if you don't have the ability to compel people to observe high standards of conduct, then you run a greater risk.
I always wondered what hearing one's own obituary might sound like, and I sort of feel like I may have just heard part of it at least.
The ideal ratio is one computer to every five students; we are nowhere close to that percentage in a lot of schools in America.
Sometimes we pay too much attention in Washington to public relations, as opposed to the substance.
The demand for electricity to have a strong, growing economy is too great to be simply offset by more conservation.
There was a Republican majority of the Senate, and it tempered the nature of the nominations being made.
Scholars and historians have dubbed the last 100 years the American Century, and I think there can be little doubt that the Council on Foreign Relations helped to make it so.
The federal government neither has the power to site transmission lines, nor do we build them. That's done, as people know, in their own communities. The siting decisions and the permitting is done at the local level, or by state governments if it's interstate in nature. And federal government - this is one area we have no authority.
The issues and challenges surrounding nuclear non-proliferation are continuously evolving. They've changed dramatically at several junctures in recent memory.
Thousands across America are glued to their web cast to hear this. And actually, I've never met one human being who said that they had seen one of those.
Well, the responsibility for maintaining a reliable transmission grid is one that's shared by an awful lot of players who have a role in the grid: Companies that either generate and transmit energy or just play the role of being the transmission systems or monitoring them.
Putting the budget ahead of the policy is the wrong way to do it. It's too often the way it's done in Washington.

Who is person today and how old is Spencer Abraham age, famous quotes