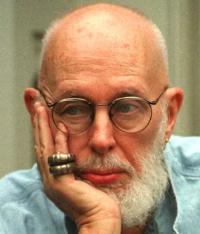 What you've got to say, you say.
If you want to find out what a writer or a cartoonist really feels, look at his work. That's enough.
People are always giving you credit for really wanting to say more than you said.
I myself do not believe in explaining anything.
If the track is tough and the hill is rough, THINKING you can just ain't enough!
Never explain what you do. It speaks for itself. You only muddle it by talking about it.
I know a way to stay friends forever, There's really nothing to it, I tell you what to do, And you do it.
I will not play tug o' war. I'd rather play hug o' war. Where everyone hugs instead of tugs, Where everyone giggles and rolls on the rug, Where everyone kisses, and everyone grins, and everyone cuddles, and everyone wins.
I believe that if you don't want to do anything, then sit there and don't do it, but don't expect people to hand you a corn beef sandwich and wash your socks for you and unzip your fly for you.
Imagine - four years you could have spent travelling around Europe meeting people, or going to the Far East of Africa or India, meeting people, exchanging ideas, reading all you wanted to anyway, and instead I wasted it at Roosevelt.
He has the obligation to society that any human being has. I don't think a satirist has any greater obligation to society than a bricklayer or anybody else.
Tell me I'm clever, Tell me I'm kind, Tell me I'm talented, Tell me I'm cute, Tell me I'm sensitive, Graceful and wise, Tell me I'm perfect - But tell me the truth.
There's a great myth about cartoonists, writers and people that are on TV.
It's always a nice feeling, having people think that you feel things much deeper than you're allowed to say, but this isn't true. If you want to find out what a writer or a cartoonist really feels, look at his work. That's enough.
To me, freedom entitles you to do something, not to not do something.
You'd better get your laugh while you're making your point, or you won't be doing it very long.
Stand-up comics reflect less of a visual humor and more of a commentary.
If you're behind the times, they won't notice you. If you're right in tune with them, you're no better than they are, so they won't care much for you. Be just a little ahead of them.

Who is person today and how old is Shel Silverstein age, famous quotes