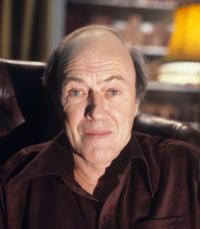 If my books can help children become readers, then I feel I have accomplished something important.
I do have a blurred memory of sitting on the stairs and trying over and over again to tie one of my shoelaces, but that is all that comes back to me of school itself.
I find that the only way to make my characters really interesting to children is to exaggerate all their good or bad qualities, and so if a person is nasty or bad or cruel, you make them very nasty, very bad, very cruel. If they are ugly, you make them extremely ugly. That, I think, is fun and makes an impact.
All through my school life I was appalled by the fact that masters and senior boys were allowed quite literally to wound other boys, and sometimes very severely.
My father was a Norwegian who came from a small town near Oslo. He broke his arm at the elbow when he was 14, and they amputated it.
Though my father was Norwegian, he always wrote his diaries in perfect English.
I never get any protests from children. All you get are giggles of mirth and squirms of delight. I know what children like.
The fine line between roaring with laughter and crying because it's a disaster is a very, very fine line. You see a chap slip on a banana skin in the street and you roar with laughter when he falls slap on his backside. If in doing so you suddenly see he's broken a leg, you very quickly stop laughing and it's not a joke anymore.
I shot down some German planes and I got shot down myself, crashing in a burst of flames and crawling out, getting rescued by brave soldiers.
A person is a fool to become a writer. His only compensation is absolute freedom.
All Norwegian children learn to swim when they are very young because if you can't swim it is difficult to find a place to bathe.
I was a fighter pilot, flying Hurricanes all round the Mediterranean. I flew in the Western Desert of Libya, in Greece, in Syria, in Iraq and in Egypt.
The writer has to force himself to work. He has to make his own hours and if he doesn't go to his desk at all there is nobody to scold him.
A little nonsense now and then is relished by the wisest men.
A writer of fiction lives in fear. Each new day demands new ideas and he can never be sure whether he is going to come up with them or not.
I began to realize how simple life could be if one had a regular routine to follow with fixed hours, a fixed salary, and very little original thinking to do.
Unless you have been to boarding-school when you are very young, it is absolutely impossible to appreciate the delights of living at home.
Two hours of writing fiction leaves this writer completely drained. For those two hours he has been in a different place with totally different people.
When I walked to school in the mornings I would start out alone but would pick up four other boys along the way. We would set out together after school across the village green.
Did they preach one thing and practice another, these men of God?

Who is person today and how old is Roald Dahl age, famous quotes