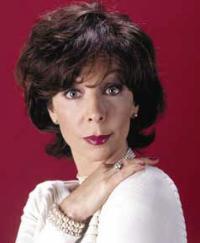 When I eventually met Mr. Right I had no idea that his first name was Always.
It wasn't that no one asked me to the prom, it was that no one would tell me where it was.
Neurotics build castles in the air, psychotics live in them. My mother cleans them.
Barbie ruined my life! It's a really bad image for women. For a long time I thought I was deformed - because my heels didn't touch the ground. I was walking around on tiptoes. What's up with that? I think that it's a bad thing for a woman to try to emulate.
A man will go to war, fight and die for his country. But he won't get a bikini wax.
It's so great to find that one special person you want to annoy for the rest of your life.
There are different kinds of humor, some is sarcastic, some introspective. Introspective fit my personality better.
Some people think having large breasts makes a woman stupid. Actually, it's quite the opposite: a woman having large breasts makes men stupid.
I was a vegetarian until I started leaning toward the sunlight.
I just love dogs, and there really is no better companion than an animal.
To attract men, I wear a perfume called 'New Car Interior.'
I wonder if other dogs think poodles are members of a weird religious cult.
Men are self-confident because they grow up identifying with super-heroes. Women have bad self-images because they grow up identifying with Barbie.
I had the worst birthday party ever when I was a child because my parents hired a pony to give rides. And these ponies are never in good health. But this one dropped dead. It just wasn't much fun after that. One kid would sit on him and the rest of us would drag him around.
I'm a very simple person. I'm very shallow. Shallow, simple, easily pleased: that's me.
I love being married. It's so great to find that one special person you want to annoy for the rest of your life.
I was going to have cosmetic surgery until I noticed that the doctor's office was full of portraits by Picasso.
Whenever I date a guy, I think, 'Is this the man I want my children to spend their weekends with?'
Men who have a pierced ear are better prepared for marriage - they've experienced pain and bought jewelry.
My boyfriend and I broke up. He wanted to get married and I didn't want him to.

Who is person today and how old is Rita Rudner age, famous quotes