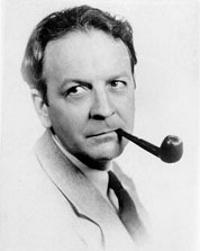 She gave me a smile I could feel in my hip pocket.
He looked about as inconspicuous as a tarantula on a slice of angel food.
From 30 feet away she looked like a lot of class. From 10 feet away she looked like something made up to be seen from 30 feet away.
Alcohol is like love. The first kiss is magic, the second is intimate, the third is routine. After that you take the girl's clothes off.
The flood of print has turned reading into a process of gulping rather than savoring.
I think a man ought to get drunk at least twice a year just on principle, so he won't let himself get snotty about it.
The more you reason the less you create.
Good critical writing is measured by the perception and evaluation of the subject; bad critical writing by the necessity of maintaining the professional standing of the critic.
I guess God made Boston on a wet Sunday.
The creative artist seems to be almost the only kind of man that you could never meet on neutral ground. You can only meet him as an artist. He sees nothing objectively because his own ego is always in the foreground of every picture.
An age which is incapable of poetry is incapable of any kind of literature except the cleverness of a decadence.
I do a great deal of research - particularly in the apartments of tall blondes.
A good story cannot be devised; it has to be distilled.
The streets were dark with something more than night.
The law isn't justice. It's a very imperfect mechanism. If you press exactly the right buttons and are also lucky, justice may show up in the answer. A mechanism is all the law was ever intended to be.
A really good detective never gets married.
At least half the mystery novels published violate the law that the solution, once revealed, must seem to be inevitable.
It is not a fragrant world.
Television is just one more facet of that considerable segment of our society that never had any standard but the soft buck.
I certainly admire people who do things.

Who is person today and how old is Raymond Chandler age, famous quotes