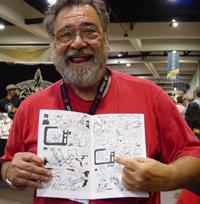 Cartooning at its best is a fine art. I'm a cartoonist who works in the medium of animation, which also allows me to paint my cartoons.
Animation is tremendously resilient. Animation will recover, as art always recovers. There's always cycles of good art.
Most of the animated films I watched, the emotions are all prepackaged like canned music, the hand actions, the sighs.
Live action writers will give you a structure, but who the hell is talking about structure? Animation is closer to jazz than some kind of classical stage structure.
What's most important in animation is the emotions and the ideas being portrayed. I'm a great believer of energy and emotion.
I'm having the same problems today that I had when I first started, saying that outrageous adult animation works.
I had the X rating on my films. Now they do as much on The Simpsons as I got an X rating for Fritz the Cat.
Wizards was my homage to Tolkien in the American idiom. I had read Tolkien, understood Tolkien, and wanted to do a sort of fantasy for American kids, and that was Wizards.
As an artist, I want to interpret my feelings - not run across the street and ask what my mother thinks.
Film has to describe and show.
I am not interested in slickness for the sake of slickness.
I draw what I feel, which is no more than doing my job.
I miss animation very passionately. Not continuously, but every once in a while I would die to do another film.
I thought I had the rights to The Lord of the Rings. I don't know how Jackson ended up with the rights.
I'm the first to admit that I can't be as good as Tolkien, and a movie can never be as good as Tolkien.
Look what Disney's done to their animation department. There wasn't an animator in charge of their animation unit!
Lord of the Rings made me realize that I'm not interested in doing anyone else's work.
My good films were independent and my bad films were not.
My movies continue to be found and be sold because there's something going on in them.
Painting pictures didn't make me a lot of money. I have to eat.

Who is person today and how old is Ralph Bakshi age, famous quotes