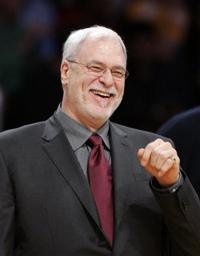 Pau is one of the best big men in the game. I mean, Pau Gasol is going to be in the Hall of Fame.
Basketball is a simple game. Your goal is penetration, get the ball close to the basket, and there are three ways to do that. Pass, dribble and offensive rebound.
Wisdom is always an overmatch for strength.
I think the most important thing about coaching is that you have to have a sense of confidence about what you're doing. You have to be a salesman, and you have to get your players, particularly your leaders, to believe in what you're trying to accomplish on the basketball floor.
Always keep an open mind and a compassionate heart.
Approach the game with no preset agendas and you'll probably come away surprised at your overall efforts.
The NBA has made a real issue about really making these superstars the premium that everybody wants to go to. That's their calling card and their marketing tool. But the coaches at the other end of the sphere are trying to make everybody on the team, even nine, 10, 11, 12, just as important, and have a real role that's meaningful.
My father was a man who didn't consider himself learned. He was a man who liked to be a farmer. He enjoyed his dairy farm and felt the calling. So there was a dedication. I was dedicated as a child to the service of God, and so there was this continual centering of a greater purpose than your own.
My philosophy is that you don't motivate players with speeches; you have motivated players that you draft. That's where they come in, and those are the guys that are competitive. You can not teach competitiveness.
If you meet the Buddha in the lane, feed him the ball.
Love is the force that ignites the spirit and binds teams together.
The winter's a little bit daunting in Montana.
Your problems never cease. They just change.
As much as we pump iron and we run to build our strength up, we need to build our mental strength up... so we can focus... so we can be in concert with one another.
I played hockey in North Dakota growing up and watch a lot of that.
There's a lot of chatter in basketball and, rightfully, you want players to be talking to each other... But sometimes in practice, it gets too verbose... so I tried to take things out of the ordinary and make them special so they'd understand the difference.
I replaced three joints in my hips and one in my knee. I'm hoping that other knee doesn't have to be done. It's one of the toughest things to overcome.
You have to be able to psychologically help your players, support-wise, be in touch with them, so I think managing people is very important.
I gave it my body and mind, but I have kept my soul.
For us tall people, the whole key is that your hips and your knees should form a right angle when you sit down. That's where backs and hips get to be problems for big guys.

Who is person today and how old is Phil Jackson age, famous quotes