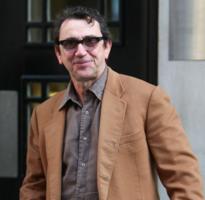 'Vinyl' is a good look at the music industry. The script was honest.
It was a wonderful experience to live the life for a year; to spend all day doing Shakespeare and then do a play in the evening.
When I was a kid doing television, they'd stick a leather jacket on me, and I would be the thug.
Acting is my passion, and Chelsea FC is my hobby.
It's great to do small plays in the theatre and then go off with Blur and play in front of thousands of people.
Being a part-time pop star was perfect, really, when I wasn't worn out by the partying.
I like people like Robert De Niro and Anthony Hopkins. And Gianfranco Zola, who played for Chelsea and Italy. He's an artist with his feet.
In my game, you get brokenhearted a bit. You do a play, get a bad review in the papers... actors are sensitive; you think of all the work you've done, and it breaks your heart, but you learn to shrug it off and to carry on.
Acting is a tough industry. There are a lot of kids out there at drama schools and not a lot of money about, especially as the arts are being cut.
I don't miss 'EastEnders.' I did a two-stretch. That was enough.
I grew up near King's Cross station in London, living in an apartment block where my dad was a caretaker.
I think that's what keeps you grounded - having your own life that's not directed by your job.
I used to go into bars on my days off, and I decided that wasn't too good for me.
I'm famous for being a silky midfielder.
My philosophy is to enjoy yourself. Do the things you want to do, like play golf!
When my daughter was born, I called her Ella Bella Mandela, because she was born the day after Mandela was released from prison.
Doing 'EastEnders' wasn't exactly suffering, but my soul's not in quick-fix TV. Theatre doesn't pay like TV work pays, though. We all have to live, don't we?
I found that golf saved me from going to the pub every day, so instead, I play golf with other unemployed actors. I'm a member of the Stage Golfing Society, and I play golf with all sorts of people.
I get on with actors, and when I'm doing a theatre show, it's great being with them all the time. But we're all alike, and it's much nicer being with people who are different.
I had a weimaraner for 11 years called China, and he was a great dog, a bit mad. They're massive, weimaraners; they've got big floppy ears. They look like a pointer, but they're liver-coloured.

Who is person today and how old is Phil Daniels age, famous quotes