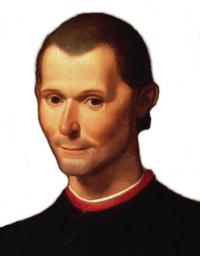 It is better to be feared than loved, if you cannot be both.
Men should be either treated generously or destroyed, because they take revenge for slight injuries - for heavy ones they cannot.
Never was anything great achieved without danger.
Men rise from one ambition to another: first, they seek to secure themselves against attack, and then they attack others.
Politics have no relation to morals.
There are three kinds of intelligence: one kind understands things for itself, the other appreciates what others can understand, the third understands neither for itself nor through others. This first kind is excellent, the second good, and the third kind useless.
God is not willing to do everything, and thus take away our free will and that share of glory which belongs to us.
Hatred is gained as much by good works as by evil.
He who wishes to be obeyed must know how to command.
The first method for estimating the intelligence of a ruler is to look at the men he has around him.
The more sand has escaped from the hourglass of our life, the clearer we should see through it.
There is nothing more difficult to take in hand, more perilous to conduct, or more uncertain in its success, than to take the lead in the introduction of a new order of things.
When you disarm the people, you commence to offend them and show that you distrust them either through cowardice or lack of confidence, and both of these opinions generate hatred.
Where the willingness is great, the difficulties cannot be great.
One who deceives will always find those who allow themselves to be deceived.
I'm not interested in preserving the status quo; I want to overthrow it.
If an injury has to be done to a man it should be so severe that his vengeance need not be feared.
Tardiness often robs us opportunity, and the dispatch of our forces.
The wise man does at once what the fool does finally.
Princes and governments are far more dangerous than other elements within society.

Who is person today and how old is Niccolo Machiavelli age, famous quotes