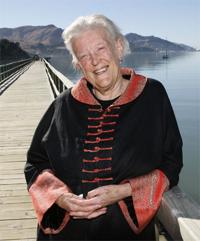 It is a good idea to know which publishers publish which stories. For example, there is no sense in sending a picture book text to a publisher who does not publish picture books.
Every writer has to find their own way into writing.
At the same time, I think books create a sort of network in the reader's mind, with one book reinforcing another. Some books form relationships. Other books stand in opposition. No two writers or readers have the same pattern of interaction.
I hope I am not too repetitive. However, coming to terms with death is part of the general human situation.
New Zealand is the only country I know well enough to write about. It can sometimes lead to complications.
I once knew a house rather like The Land of Smiles - an old house occupied by a varied collection of young people, mainly students. However none of these people were true models for the characters in the book, though their way of life may have been.
I think I am too interested in my own ideas to copy anyone else's, but I find that other people's imagery, the flow of language in the outside world, games with words, and ideas about relationships are all most important to me.
I've never actually been a fighter myself - fighting tires me out and I'm not an efficient fighter anyway - but I have certainly seen other people have great complicated goes at one another.
I, personally, have found reading a continual support to writing.
In a way, the characters often do take over.
Anyone interested in the world generally can't help being interested in young adult culture - in the music, the bands, the books, the fashions, and the way in which the young adult community develops its own language.
At this stage I am not involved with young adults as closely as many other writers. My children are grown up and my grandchildren are still quite young.
Being a librarian certainly helped me with my writing because it made me even more of a reader, and I was always an enthusiastic reader. Writing and reading seem to me to be different aspects of a single imaginative act.
By the time ordinary life asserted itself once more, I would feel I had already lived for a while in some other lifetime, that I had even taken over someone else's life.
I don't think I prefer writing for one age group above another. I am just as pleased with a story which I feel works well for very small children as I do with a story for young adults.
I had to wait for a long time before I could support myself with writing. However, being a writer is what I have most wanted to be, from the time I was a child.
It can certainly happen that characters in more sophisticated stories can 'take over' as they develop and change the author's original ideas. Well, it certainly happens to me at times.
Of course there are big differences in length and character and vocabulary, but each level has its particular pleasures when it comes to the words one can use and the way one uses them.
There are certainly times when my own everyday life seems to retreat so the life of the story can take me over. That is why a writer often needs space and time, so that he or she can abandon ordinary life and 'live' with the characters.
They are imaginary characters. But perhaps not solely the products of my imagination, since there are some aspects of the characters that relate to my own experience of a wide variety of people.

Who is person today and how old is Margaret Mahy age, famous quotes