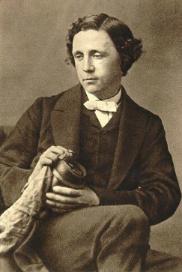 If you don't know where you are going, any road will get you there.
There are three hundred and sixty-four days when you might get un-birthday presents, and only one for birthday presents, you know.
Oh, 'tis love, 'tis love that makes the world go round.
'The time has come,' the walrus said, 'to talk of many things: of shoes and ships - and sealing wax - of cabbages and kings.'
Twinkle, twinkle little bat How I wonder what you're at! Up above the world you fly, Like a tea-tray in the sky.
Why, sometimes I've believed as many as six impossible things before breakfast.
There comes a pause, for human strength will not endure to dance without cessation; and everyone must reach the point at length of absolute prostration.
That's the reason they're called lessons, because they lesson from day to day.
'But I don't want to go among mad people,' said Alice. 'Oh, you can't help that,' said the cat. 'We're all mad here.'
I can't go back to yesterday - because I was a different person then.
Sometimes I've believed as many as six impossible things before breakfast.
Contrariwise, if it was so, it might be; and if it were so, it would be; but as it isn't, it ain't. That's logic.
While the laughter of joy is in full harmony with our deeper life, the laughter of amusement should be kept apart from it. The danger is too great of thus learning to look at solemn things in a spirit of mockery, and to seek in them opportunities for exercising wit.
We called him Tortoise because he taught us.
The rule is, jam tomorrow and jam yesterday - but never jam today.
Always speak the truth, think before you speak, and write it down afterwards.
His answer trickled through my head like water through a sieve.
I have proved by actual trial that a letter, that takes an hour to write, takes only about 3 minutes to read!
'When I use a word,' Humpty Dumpty said in rather a scornful tone, 'it means just what I choose it to mean - neither more nor less.'
Everything's got a moral, if only you can find it.

Who is person today and how old is Lewis Carroll age, famous quotes