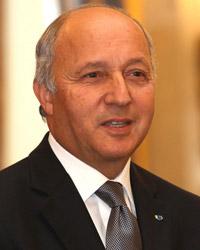 The demographic weight of countries such as China and India exercise a massive pressure on our wages and salaries. They have accomplished massive technological advances and the revolution in information technology has reduced the costs of transport.
France on its own cannot impose its point of view. But neither should it give up on its demands. With a clear vote for change France will be in a strong position.
The U.S. withdrawal from the Kyoto protocol endangers the entire process.
I am a partisan and artisan of Europe. But I draw the lessons of my experience in government.
For a long time many believed that there would be an automatic adjustment and counted on a rapid increase in the wages of the emerging nations, on our advances in technology and the costs of transport preventing disruption. But this reassuring analysis is out of date.
At the same time the Constitution sets in stone the Stability Pact and risks preventing member States from implementing a policy of growth. So we are not able to do things at the European or the national level.
But Maastricht was not the end of history. It was a first step towards a Europe of growth, of employment, a social Europe. That was the vision of Francois Mitterrand. We are far from that now.
The single currency should allow the European Union, and therefore France, to balance its monetary strength with the United States. It should help us adjust to the development of China.
There are 20 million unemployed and what does the Constitution offer us in the Europe of 25, 27 and soon to be 30: policies of unrestricted competition to the detriment of production, wages, research and innovation.
I want to make an extremely strong appeal to those who abstained. Vote. It takes five minutes and then it's for five years.
Shopkeepers are not bankers.
We on the left who are pro-European and Internationalist wish to unite the peoples under a social model.
This assumes an upward revision of the European Budget, which is precisely what Jacques Chirac refuses to do. On the contrary, he has demanded a reduction.
This revision of the Constitution will not be perfect. But at least the Constitution will not be inflexible. It will be a step towards the Social Europe which we wish.

Who is person today and how old is Laurent Fabius age, famous quotes