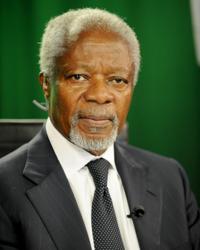 Knowledge is power. Information is liberating. Education is the premise of progress, in every society, in every family.
On climate change, we often don't fully appreciate that it is a problem. We think it is a problem waiting to happen.
Education is a human right with immense power to transform. On its foundation rest the cornerstones of freedom, democracy and sustainable human development.
To live is to choose. But to choose well, you must know who you are and what you stand for, where you want to go and why you want to get there.
Unfortunately, very few governments think about youth unemployment when they are drawing up their national plans.
In their greatest hour of need, the world failed the people of Rwanda.
More than ever before in human history, we share a common destiny. We can master it only if we face it together. And that, my friends, is why we have the United Nations.
It has been said that arguing against globalization is like arguing against the laws of gravity.
Gender equality is more than a goal in itself. It is a precondition for meeting the challenge of reducing poverty, promoting sustainable development and building good governance.
There is no development strategy more beneficial to society as a whole - women and men alike - than the one which involves women as central players.
The Lord had the wonderful advantage of being able to work alone.
More countries have understood that women's equality is a prerequisite for development.
When economic conditions are difficult, people tend to be less generous and protect themselves; the question of solidarity doesn't mean much to them at that time.
In the 21st century, I believe the mission of the United Nations will be defined by a new, more profound awareness of the sanctity and dignity of every human life, regardless of race or religion.
I urge the Iraqi leadership for sake of its own people... to seize this opportunity and thereby begin to end the isolation and suffering of the Iraqi people.
We have to choose between a global market driven only by calculations of short-term profit, and one which has a human face.
We have the means and the capacity to deal with our problems, if only we can find the political will.
Business, labor and civil society organizations have skills and resources that are vital in helping to build a more robust global community.
In the rush for justice it is important not to lose sight of principles the country holds dear.
If we can come up with innovations and train young people to take on new jobs, and if we can switch to clean energy, I think we have the capacity to build this world not dependent on fossil-fuel. I think it will happen, and it won't destroy economy.

Who is person today and how old is Kofi Annan age, famous quotes