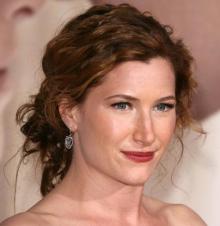 I was on vacation with my family when I got the scripts for 'Wanderlust' and I was trying to work on the audition while I was on vacation. I remember a big gust of wind blew the entire script into the pool, so I had to dry it with a hairdryer.
I think I was always a drama queen. I really, really, really loved playing pretend.
My life is a big accident, so where I end up, I think it's all accidents.
I'm such a grandma. I don't tweet; I don't have a Facebook page.
Even the shows or movies that we know are not going to change the world, I love this. I love 'em. I'm a movie fan. I'm a nerd of any kind. I love a big studio comedy as much as I love the teeniest tiniest of indie. I'm not a snob in that way. I really do like a big, big studio comedy.
'Free Agents' was an awesome experience. I never play the glam girl in anything, so that was a new experience. I would walk into one of my trailers and it would be like Spanx, a spray-tan gun, and chicken cutlets. I would have hair extensions. It was hilarious. Every day felt like I was turning into an awesome drag queen.
As an actor, you know, I love not being pigeonholed, which is great. No one really knows who I am. So that's a positive.
There is a lot of kissing in 'Boeing-Boeing.' A lot! And not pecks on the cheek or lips - although there's some of that, too - but full-on, farcical lip locks. My poor husband. He definitely wasn't prepared for as much smooching as there is.
There was something about the Cleveland Play House that was the holiest place - you know, with the ghost light on the stage and the brick. It was just the most beautiful theater in the world.
I feel grateful that the person I end up working with a lot is Paul Rudd. He's a prince among men, and so talented, and generous, and effortless.
I have two young kids. So my VCR, like, you kind of have to sift through a lot of, like, 'Animal Mechanicals,' 'Mickey Mouse Clubhouse.'
I wish when I was 17, somebody had told me not to care so much about what other people had thought.
A lot of actors are like, 'Why do I do this? My character wouldn't do this? This doesn't make sense.' And in a comedy, you kind of just need to walk into the door.
And then 'Wanderlust,' Ken Marino and David Wain wrote the funniest - they're amazing. That was one of my most favorite creative experiences; we're all up at that commune, a small group of people. Everyone was funnier than the next. It was an amazing ensemble feeling. Everyone gave and took in the best way.
I don't want to ever say to somebody, 'You don't have to see it. It's not good.' I'm done with that. I'd love to just do things that I respect. That being said, I do have two children to put through school, so we'll see if I can put my money where my mouth is, but I would love to just work with people I respect.
I feel like there is something about having a copacetic world POV that helps in making a comedy. Like, David Wain has such a particular way of looking at the world. It helps when everyone can see behind his eyes, you know?
I've always done theater. I've never thought of myself as a comedic actress in any way. 'Anchorman' kind of cracked that open. When I got a small part in 'Anchorman,' I didn't know it was possible on camera to improvise. So I was like, 'What's happening?'

Who is person today and how old is Kathryn Hahn age, famous quotes