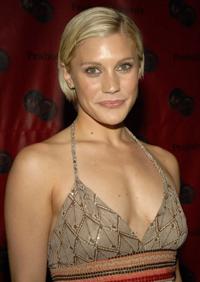 I have to remind myself constantly to not be antisocial, because I stay to myself a lot. I'm a lot more introspective than my characters.
Some of the craziest people I've met, in my life, are some of the most brilliant people I've met.
My dad always said that hard work beats talent when talent doesn't work hard enough.
I'd never put all my chips anywhere, because I don't want to close any doors, but I was raised in a very blue-collar family. I was raised by parents who said, 'If you don't go to work every day, you're not contributing', so that's my mentality. I have to work every day; I have to bring home a paycheck.
I hate horror movies, with a passion.
I get recognized so much. It happens mostly when I'm in Starbucks.
I famously had a huge television producer say to me one time, 'Can you please stop doing that to your face? It's very distracting and unattractive.' And I was like, 'You mean move it? Okay, sorry, I guess we're not going to work together.'
It's interesting, the things you learn when you're 21. I learned never to get tattoos in the middle of shooting a movie. Because if you're not Angelina Jolie or Megan Fox, they will fire you.
You know, I like to think that I'm a really strong, tough person, but I'm not. I'm a very, very needy person. I'm very insecure. I'm very impressionable.
I think God's wrath and purgatory are the only things keeping me on the straight and narrow. I like the idea of purgatory. It's like a cosmic do-over.
I'm a bit insane when it comes to doing my own stunts and getting down and dirty. It's fun, you know? It's things I wouldn't normally do in my real life, so when I go to work and get to beat people up and shoot guns and get waterboarded, those are things I find completely interesting.
I'm more of a thriller-horror fan - things that could really happen. I don't like scary movies, the 'Saw' movies scare the crap out of me - I think I've seen two of them and I wanted to go crawl in a hole.
Science fiction fans are awesome - they love you so much that they'll watch anything you do, even if it's complete crap. I never dreamed that I would go to conventions and sit down and have coffee with a Klingon. It's so weird, but it's my life.
As an actor, you put yourself out there. You put yourself in the arena as an easy target.
As far as I'm concerned... there's a side to an actor that wants to go on and play a thousand different roles.
As long as people want to see me do this action and sci-fi stuff, it would be wrong of me to deny the fans what they want to see.
I absolutely have not spoken to Marvel. It doesn't mean that my team hasn't spoken to Marvel.
I am a daddy's girl at heart, even though I'm in my 30s.
I am tired of women playing action heroes like men, because they are not men. But sometimes they are written like men.
I don't subscribe to the thinking that being typecast is a bad thing.

Who is person today and how old is Katee Sackhoff age, famous quotes