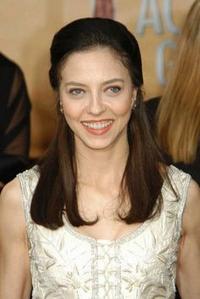 I love being creative. I love acting, but I also love directing because you get to have a vision for the whole and bring that vision to fruition.
I enjoy working on new, different types of characters. Playing a range is what excites me.
I'm fascinated by people in general and what interests them, what it is that someone connects to or what it is that they're passionate about.
I've always wanted to do a period movie, to do something the turn of the century, and I'm really fascinated by that whole time period.
I've been really fortunate in the fact that I've gotten a chance to do a real wide range of all different kinds of characters.
I've never played an attorney, and I'd like to do so on a show like 'The Practice' or 'Law & Order.'
I have an action figure, and so do my parents, so it's odd that we all have these dolls of ourselves. It's a little bit surreal but kind of fun. You can play with the whole family.
I like to read. I go to movies quite a bit. I often go to see friends in theater productions. I hike, stretch and work out. I like to sing. I love going back to acting class and working on new material.
I like working in both movies and television. Television is faster, not very much rehearsal and a lot of material is shot in a day. Big budget movies are luxurious in terms of the schedule. Independent films often shoot fast as well.
I was a professional ballerina. After becoming an actress, I did a lot of theater, which included musical theater. The first musical play I did was Murray Schisgal's 'The Pushcart Peddlers.'
Personally as an actress, when I work on something, that's it and then I move onto the next thing. I'm not someone who sits and watches my stuff. I like to go onto the next thing that I'm working on, and the thing that's been completed is completed.

Who is person today and how old is Juliet Landau age, famous quotes