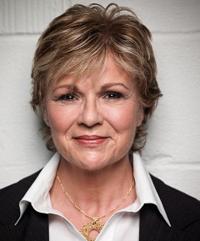 Sixty felt like a big landmark. Not in a dreadful sense, but none of the other birthdays have bothered me. It's got labels on it - OAP, retirement - and I just wanted to take stock. I wanted to be in my greenhouse at home and at least give myself the opportunity of not working again.
I can understand why people get annoyed at being remembered for one thing, but a lot of actors aren't remembered for anything. I don't mind that.
My mother was born on a tiny farm in County Mayo. She was meant to stay at home and look after the farm while her brother and sister got an education. However, she came to England on a visit and never went back.
It seems that when you get to a certain age you almost give yourself permission to misbehave and say what you think. People allow it, with very old people.
It's getting better but men still earn more and there are more jobs for them. Ageism is a big thing. Parts for women disappear as you get older.
I don't like being out of the crowd. It's lonely within a group.
Debate is so much better than denial.
I don't know if you can change things, but it's a drop in the ocean.
Jane Austen was an extraordinary woman; to actually be able to survive as a novelist in those days - unmarried - was just unheard of.
I always loved my mother, felt loved, but she was judgmental. Her father in Ireland didn't approve of women generally, and she took on his values. She believed her own mother was foolish.
Oh all the time when Victoria Wood and I did our series. There were people asking 'Can women be funny?' People still ask that. It's like asking: 'Can women breathe in and out?'
There were all us baby boomers who had a grammar school education, started to learn, then went on the pill, the whole thing, and so there are today a lot more women writers, editors, producers, and so a lot more women's stories. God, the BBC's practically run by women.
I keep seeing myself in my daughter, and I see my mother in me and in her. Bloody hell.
I was asked about doing a nude shoot for men's magazine GQ. I thought it was the funniest thing I'd ever heard.
I was the little, funny one. I felt I was the child among grown women.
I went through bits of the 60s and thought myself a bit of a hippy.
In order to be creative you have to be allowed to fail.
Suddenly, you are very much in the present, and you learn it's really the place where you should always live.
The money isn't a lure. I've done very well out of this business.
The way I relax is I think, 'I haven't got anything coming up.' I like to know there are months ahead when I've got nothing.

Who is person today and how old is Julie Walters age, famous quotes