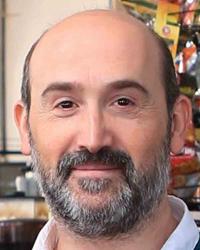 Sometimes, rehearsals are not worth it if you do not have an accurate cast, and that is one of the most difficult parts about a film.
A film is a chain of very difficult decisions, and I think one of them is to choose an accurate cast.
Here in America, every single actor, since they were little boys, they sing and dance and perform like angels. We don't do that. We are actors who work in a theater in very classic performances or plays.
There is some information that an actor doesn't need, and that's okay. I can't control everything. I don't want to control everything. Sometimes, you want to control everything, and you want to know the size of the lens and stuff like that. I am so relaxed as an actor because I don't want to control everything. I just want to control my part.
Actors are always looking for the eyes of the other actors because you need help and you need connection.
I look Asian. I need to go to Japan.
When I saw 'Talk to Her' for the first time, I was crying out loud because I couldn't imagine that I was doing that film.
Every single director stops at the moment he thinks he has the shot. Sometimes, directors shoot an establishing shot where everything is in the shot. He's going to use this at the beginning and the end.
For me, it's a real shock to see American mainstream films. I can't see these films because it's always the same thing to me. This is very American. Violence is very American, and I can't understand these films. Why do they use violence? To show what? Masculinity? To show fear? Defense? What are you showing with all this violence?
It's funny to see a film in Spain with a lot of violence because we don't have a lot of violence. Well, of course, we have violence, some murders, some terrorism and a lot of things. We have suffered a dictatorship, and we talk about the civil war constantly.
The energy in a comedy is very serious. Somebody said comedy is a tragedy plus time. When you have a tragedy, for example, like this, like, 'We're going to die,' and you have time, like, five hours to die, it becomes a comedy.

Who is person today and how old is Javier Camara age, famous quotes