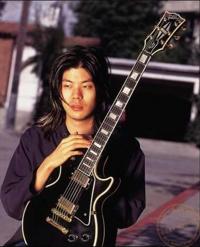 I love a lot of the New York bands, but Patti Smith stands out. I just read 'Just Kids' and it's an inspirational, well-written account of an emerging New York artist in the late seventies.
So there was something of a learning curve with doing your own thing and people seeing you outside of the band. I mean, people have never really heard my voice before - or heard a whole record of mine before. So it was a completely new experience.
We have a partnership deal with New Line Records, which is part of New Line Cinema, and... I worked on that.
There is a lot of work just in terms of traveling and logistics and people and gear and all that kind of stuff. But I never really have problems playing music. That never seems like work.
Well, I'm pretty domestic actually. I walk my dog. I go grocery shopping. I hang out with friends. I'm pretty normal, whatever normal is, on my off time.
I like a lot of different kinds of music. I like strong projects, big music.
I started a recording studio. I started producing people and doing remixes.
Yeah, I'm sure there are stereotypes of Asian people.
After 12 intense years of rock music, I was happy to get away from making a record and going out on a tour. When I did it, I wanted to feel inspired. After a while I finally had my fill working on other people's music, and I started coming up with music on my own and said, 'This could be for me.'
And they kind of left to find a guitar player at the very end, so you know, I don't really take it as any slight that I wasn't able to play on the record. It's flattering just to play with them period.
At some point, I had to make a decision: I could practice more and become a really great guitar player or I could work on writing better songs. There are only so many hours in the day, and I found writing songs more fulfilling than working on becoming this virtuoso guitar player.
But, yeah, as far as Asian Americans go, I hope they know they can look at me and see that they can do music on their own, within a band or just on their own, and not feel like there's any barriers. I've never felt any particular barriers myself, being who I am.
It's much easier to work on other people's music and play in other people's bands as a guitar player instead of being the main songwriter and singer. That's a really big job to do that.
Musicians always come off sounding a little bit pretentious, and a little bit... I don't know, hypocritical, from what they do, talking about strong issues.
You know, it's going to be a really long tour, and well, I guess I'll see what happens with A Perfect Circle, 'cause they do other projects too, and I don't know. I hope I can always do a lot of different things, do 'em well.
All the bands I've played with have had dynamic front men.
Even from a listening end now, I'm still completely a fan of music.
I grew up in the suburbs of Chicago.
I like the challenges of doing different things. It keeps things fresh for me.
I live most of the time in New York now. I have an apartment there.

Who is person today and how old is James Iha age, famous quotes