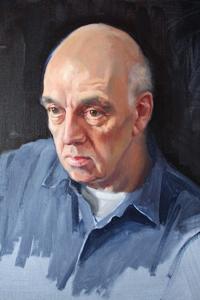 Writing for the page is only one form of writing for the eye. Wherever solemn inscriptions are put up in public places, there is a sense that the site and the occasion demand a form of writing which goes beyond plain informative prose. Each word is so valued that the letters forming it are seen as objects of solemn beauty.
Some people think that English poetry begins with the Anglo-Saxons. I don't, because I can't accept that there is any continuity between the traditions of Anglo-Saxon poetry and those established in English poetry by the time of, say, Shakespeare. And anyway, Anglo-Saxon is a different language, which has to be learned.
One does not become a guru by accident.
An aria in an opera - Handel's 'Ombra mai fu,' for example - gets along with an incredibly small number of words and ideas and a large amount of variation and repetition. That's the beauty of it. It's not taxing to the listener's intelligence because if you haven't heard it the first time round, it'll come around again.
When we study Shakespeare on the page, for academic purposes, we may require all kinds of help. Generally, we read him in modern spelling and with modern punctuation, and with notes. But any poetry that is performed - from song lyric to tragic speech - must make its point, as it were, without reference back.
Metrics are not a device for restraining the mad, any more than 'open form' or free verse is a prairie where a man can do all kinds of manly things in a state of wholesome unrestrictedness.
Considering the wealth of poetic drama that has come down to us from the Elizabethan and Jacobean periods, it is surprising that so little of any value has been added since.
Some of my educated Filipino friends were aspiring poets, but their aspirations were all in the direction of the United States. They had no desire to learn from the bardic tradition that continued in the barrios. Their ideal would have been to write something that would get them to Iowa, where they would study creative writing.
Imitation, if it is not forgery, is a fine thing. It stems from a generous impulse, and a realistic sense of what can and cannot be done.
Modernism in other arts brought extreme difficulty. In poetry, the characteristic difficulty imported under the name of modernism was obscurity. But obscurity could just as easily be a quality of metrical as of free verse.
The 1960s was a period when writers in the West began to be aware of the extraordinary eloquence and popular attraction of the Russian poets such as Yevtushenko and Voznesensky - oppositional figures who could draw crowds. The Russian poets recited from memory as a matter of course.
If you're writing a song, you have to write something that can be understood serially. When you're reading a poem that's written for the page, your eye can skip up and down. You can see the thing whole. But you're not going to see the thing whole in the song. You're going to hear it in series, and you can't skip back.
This is what rhyme does. In a couplet, the first rhyme is like a question to which the second rhyme is an answer. The first rhyme leaves something in the air, some unanswered business. In most quatrains, space is created between the rhyme that poses the question and the rhyme that gives the answer - it is like a pleasure deferred.
Poetry carries its history within it, and it is oral in origin. Its transmission was oral. Its transmission today is still in part oral, because we become acquainted with poetry through nursery rhymes, which we hear before we can read.
The basic rhymes in English are masculine, which is to say that the last syllable of the line is stressed: 'lane' rhymes with 'pain,' but it also rhymes with 'urbane' since the last syllable of 'urbane' is stressed. 'Lane' does not rhyme with 'methane.'
The lullaby is the spell whereby the mother attempts to transform herself back from an ogre to a saint.
English poetry begins whenever we decide to say the modern English language begins, and it extends as far as we decide to say that the English language extends.
For poets today or in any age, the choice is not between freedom on the one hand and abstruse French forms on the other. The choice is between the nullity and vanity of our first efforts, and the developing of a sense of idiom, form, structure, metre, rhythm, line - all the fundamental characteristics of this verbal art.
Free verse seemed democratic because it offered freedom of access to writers. And those who disdained free verse would always be open to accusations of elitism, mandarinism. Open form was like common ground on which all might graze their cattle - it was not to be closed in by usurping landlords.
I've not been a prolific poet, and it always seemed to me to be a bad idea to feel that you had to produce in order to get... credits. Production of a collection of poems every three years or every five years, or whatever, looks good, on paper. But it might not be good; it might be writing on a kind of automatic pilot.

Who is person today and how old is James Fenton age, famous quotes