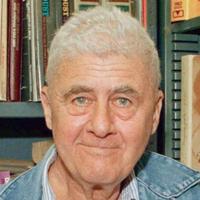 The secrets of success are a good wife and a steady job. My wife told me.
I do insist on making what I hope is sense so there's always a coherent narrative or argument that the reader can follow.
I would talk in iambic pentameter if it were easier.
Nothing in the universe can travel at the speed of light, they say, forgetful of the shadow's speed.
Language is remarkable, except under the extreme constraints of mathematics and logic, it never can talk only about what it's supposed to talk about but is always spreading around.
Robert Frost had always said you mustn't think of the last line first, or it's only a fake poem, not a real one. I'm inclined to agree.
It may be said that poems are in one way like icebergs: only about a third of their bulk appears above the surface of the page.
When I was starting to write, the great influence was T.S. Eliot and after that William Butler Yeats.
For a Jewish Puritan of the middle class, the novel is serious, the novel is work, the novel is conscientious application why, the novel is practically the retail business all over again.
A teacher is a person who never says anything once.
I like all my children, even the squat and ugly ones.
The spirit world doesn't admit to communicating with me, so it's fairly even.
I have a plot, but not much happens.
Language cares.
History is one of those marvelous and necessary illusions we have to deal with. It's one of the ways of dealing with our world with impossible generalities which we couldn't live without.
A lot happens by accident in poetry.
I sometimes talk about the making of a poem within the poem.
I think there's one thing which distinguishes our art - we don't consider. We don't think. We write a little verse because it comes to us.
I've never read a political poem that's accomplished anything. Poetry makes things happen, but rarely what the poet wants.
Write what you know. That should leave you with a lot of free time.

Who is person today and how old is Howard Nemerov age, famous quotes