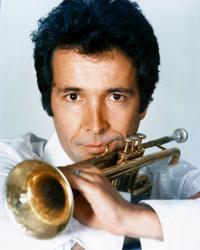 I like to listed to the adventurous guys - the Coltranes, Miles Davis, the guys who just let it loose.
I wake up in the morning, I do a little stretching exercises, pick up the horn and play.
Mexican Shuffle was a turning point of the Brass.
Instrumental music can spread the international language.
The reaction to this album has just been fabulous around the world... and I've had offers to perform from around the world and I'm tempted to do it. I've got itchy lips.
It's - as opposed to tape where you have a magnetic tape that's excited by frequencies that you hit, digital was a process where musical sounds are transferred to numbers and stored as numbers.
I find that it's nice to work with somebody and spin off on someone else's feelings. You get a little jaded by yourself.
We always felt that if you do something with quality and integrity, then it's going to come back to you.
Although there was a point with the Tijuana Brass where we were playing for such huge crowds that I kind of lost contact. At one point, the only connection I had with the audience was with people out there lighting cigarettes.
If you look at a record under a microscope, the high frequencies are short jagged edges... and the low frequencies are long swinging ones are deep bass sounds. When it cut it at half speed, you're getting more of those on the record.
Clifford Brown was in the jazz circles considered to be probably the greatest trumpet player who ever lived.
I confess that I listen to my own music for my own pleasure.
I practice every day. I've been doing it since I was eight.
It's very clean. With tape, you get noise.
I don't think radio is selling records like they used to. They'd hawk the song and hawk the artist and you'd get so excited, you'd stop your car and go into the nearest record store.
Selfishly, I make music for me. I like to make music. I like looking for songs. I like working with interesting musicians. I like producing records. It's something I will always do.
I'm sure I'll go back again and record in the digital process.
I like to listen to classical music... I like mainline jazz.
I was taken in by the bravado and the sounds of Mexico... not so much the music, but the spirit.
The Japanese seem to be a loyal audience.

Who is person today and how old is Herb Alpert age, famous quotes