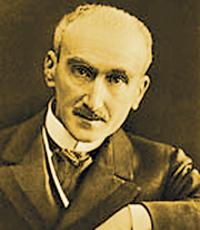 In reality, the past is preserved by itself automatically.
We regard intelligence as man's main characteristic and we know that there is no superiority which intelligence cannot confer on us, no inferiority for which it cannot compensate.
To exist is to change, to change is to mature, to mature is to go on creating oneself endlessly.
When we make the cerebral state the beginning of an action, and in no sense the condition of a perception, we place the perceived images of things outside the image of our body, and thus replace perception within the things themselves.
Religion is to mysticism what popularization is to science.
Homo sapiens, the only creature endowed with reason, is also the only creature to pin its existence on things unreasonable.
The present contains nothing more than the past, and what is found in the effect was already in the cause.
Instinct perfected is a faculty of using and even constructing organized instruments; intelligence perfected is the faculty of making and using unorganized instruments.
There is nothing in philosophy which could not be said in everyday language.
An absolute can only be given in an intuition, while all the rest has to do with analysis.
Wherever anything lives, there is, open somewhere, a register in which time is being inscribed.
In its entirety, probably, it follows us at every instant; all that we have felt, thought and willed from our earliest infancy is there, leaning over the present which is about to join it, pressing against the portals of consciousness that would fain leave it outside.
Some other faculty than the intellect is necessary for the apprehension of reality.
Genius is that which forces the inertia of humanity to learn.
I cannot escape the objection that there is no state of mind, however simple, that does not change every moment.
Life does not proceed by the association and addition of elements, but by dissociation and division.
You will obtain a vision of matter that is perhaps fatiguing for your imagination, but pure and stripped of what the requirements of life make you add to it in external perception.
The only cure for vanity is laughter, and the only fault that is laughable is vanity.
Intelligence is the faculty of making artificial objects, especially tools to make tools.
Think like a man of action, act like a man of thought.

Who is person today and how old is Henri Bergson age, famous quotes