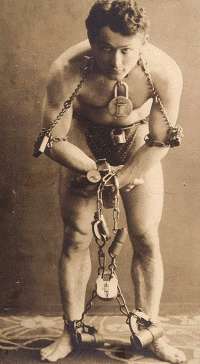 Flames from the lips may be produced by holding in the mouth a sponge saturated with the purest gasoline.
What the eyes see and the ears hear, the mind believes.
My professional life has been a constant record of disillusion, and many things that seem wonderful to most men are the every-day commonplaces of my business.
But then, so far as I know, I am the only performer who ever pledged his assistants to secrecy, honor and allegiance under a notarial oath.
It is needless to say that women make the most patient as well as the most dangerous pickpockets.
To cause the face to appear in a mass of flame make use of the following: mix together thoroughly petroleum, lard, mutton tallow and quick lime. Distill this over a charcoal fire, and the liquid which results can be burned on the face without harm.
I am a great admirer of mystery and magic. Look at this life - all mystery and magic.
Only one man ever betrayed my confidence, and that only in a minor matter.
Fire has always been and, seemingly, will always remain, the most terrible of the elements.
The eating of burning brimstone is an entirely fake performance.
It is still an open question, however, as to what extent exposure really injures a performer.
Pickpockets either work alone or in pairs, or what is called a mob.
A common pickpocket trick is for the operator to carry a shawl or overcoat carelessly over the left arm, and to take a seat on the right side of the person they intend to rob in a streetcar or other vehicle.
How the early priests came into possession of these secrets does not appear, and if there were ever any records of this kind the Church would hardly allow them to become public.
I make the most money, I think, in Russia and Paris, for the people of those countries are so willing to be amused, so eager to see something new and out of the ordinary.
The pickpocket is usually very well dressed and of prepossessing appearance.
No performer should attempt to bite off red-hot iron unless he has a good set of teeth.
In all feats of fire-eating it should be noted that the head is thrown well back, so that the flame may pass out of the open mouth instead of up into the roof, as it would if the head were held naturally.
I think that in a year I may retire. I cannot take my money with me when I die and I wish to enjoy it, with my family, while I live. I should prefer living in Germany to any other country, though I am an American, and am loyal to my country.
Another method of eating burning coals employs small balls of burned cotton in a dish of burning alcohol.

Who is person today and how old is Harry Houdini age, famous quotes