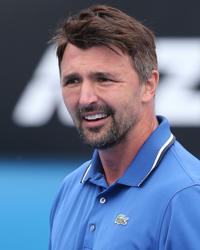 At her birthday, my seven-year-old daughter will say that she wants these big cakes and certain expensive toys as presents, and I can't say no to her. It would just break my heart. But when I was little, for birthdays we just played outside and we were happy if we got any cake.
My sporting hero was Drazen Petrovic, the NBA basketball player, who was killed in a car accident in 1993. He was a good friend, an unbelievable player, and I dedicated my Wimbledon win to him.
As soon as I step on the court I just try to play tennis and don't find excuses. You know, I just lost because I lost, not because my arm was sore.
While I didn't have everything that I wanted, I was still a happy kid.
Although we didn't have much when I was growing up in Split, Croatia, my parents always tried to ensure that my sister and I had the things we needed, and it was enough for us.
I must be the only player in the world who ever injured himself for a tournament by stepping on a shell on the beach. I don't know what I'm going to do.
You can't slow the game here. It's grass, it's always going to be fast.
If you are given a lot of money without having to work for it, you won't appreciate it as much as if you made it yourself.
It's easier when you play. You get your emotion out. You scream. You yell. You do whatever you want. You play. But it's tough to sit.
Since retiring I have spent a lot of time with my family, on my boat, and playing football.
There are not many Irish people playing tennis!
It's fun to be there with the guys, to practice with them, arrange the balls, do this, do that, but when you play you can get some of this nervousness out of your system.
I think I owe it to myself and my fans in Britain to play one more Wimbledon.
The best book I read this year was 'The Da Vinci Code.'
Winning Wimbledon was a great feeling and it is still a great feeling. It has given me so much confidence.

Who is person today and how old is Goran Ivanisevic age, famous quotes