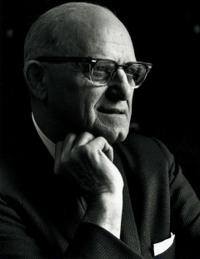 Nobody who ever gave his best regretted it.
You can achieve only that which you will do.
Nothing is work unless you'd rather be doing something else.
Find out what the other team wants to do. Then take it away from them.
San Francisco has always been my favorite booing city. I don't mean the people boo louder or longer, but there is a very special intimacy. When they boo you, you know they mean you. Music, that's what it is to me. One time in Kezar Stadium they gave me a standing boo.
If you live long enough, lots of nice things happen.
Many people flounder about in life because they do not have a purpose, an objective toward which to work.
At last, the newspapers discovered the Bears. I kept writing articles about upcoming games, and by reading the papers, I learned editors like superlatives. I blush when I think how many times I wrote that the next game was going to be the most difficult of the season or how a new player was the fastest man in the West.
Don't do anything in practice that you wouldn't do in the game.
When they boo you, you know they mean you.

Who is person today and how old is George Halas age, famous quotes