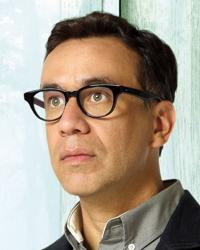 My father came from Germany. My mom came from Venezuela. My father's culturally German, but his father was Japanese. I was raised in New York and spent two years in Rio. My parents met at the University of Southern Mississippi, and they had me there, and then we moved to New York. I'm not very familiar with Mississippi.
Even when I go do comedy stuff live, I can still feel the drummer in me about to go onstage.
I enjoy getting to work on 'Saturday Night Live', where I get to do people like David Paterson. And then, its like a different muscle to do someone like a bicycle guy on' Portlandia'.
When I first started going to Portland, people told me about Stumptown. They were like 'Oh, it's the best coffee,' and I thought, 'How good could it really be?' I'm like, 'Sure, great, uh... I'd love to see it.' But then when I went, it truly, I am not kidding, is the best coffee I have ever had.
There are bands that I am friends with, who will invite me up on stage. Like Les Savy Fav, who have had me on stage, and I have played on their record. There are a couple of bands like that. Yo La Tango has invited me to play with them.
I'm so glad cities have personalities, just like people have personalities. That's something that makes me smile.
Chalkboards being used inside the restaurant seem to be a good sign that the proprietors are proud of their food, and that's kind of nice, actually - it's a nice personal touch.
I have an inability to relax. I try to make every day a work day. I get pleasure from work... I try to think of sketch ideas, stand-up pieces. I am incapable of leisure and leisure time.
I love 'Saturday Night Live,' and I really feel like people who have left before me have always stayed with the show. They never really quite left, which is nice. Everyone kind of stays close.
I try to maintain a high level of coolness. Which means I've gotta look at lot of magazines. I've gotta look at a lot of ads to see what people want to wear.
I've always been a fan of instructional videos. The bass-player ones are insane. The music on them is fascinating. It's not something you hear on CDs or would really ever play in bands. You listen to it and are like, 'What is happening?' It's this blizzard of notes in weird time signatures, and they're trying to teach you that.
I've met Tony Danza. He was really nice. And he looks... I feel like he hasn't aged. He looks exactly the same. He's just Tony Danza. He's exactly the same as he's always been.
When people say that L.A. doesn't have a culture, I think it really does: a very old culture, and very specific. There's streets named after entertainers, and statues of entertainers, and it's great. Entertainment is still art, even if it makes billions of dollars. So it's like a city built on entertainment, and art in a way.
Bill Hader does a really good impression of me.
Every music journalist I've ever met has been stunningly beautiful.
I can't relax. I'm not happy unless I'm working on stuff. 'SNL' is always a huge workload, as enjoyable as it is.
I feel bad for everyone I've gone out with.
I loooved Sleater-Kinney like a crazy person.
I tend to think that there is a sophistication to everything at 'Saturday Night Live,' including the sketches.
I think I was a terrible husband, I think I'm a terrible boyfriend.

Who is person today and how old is Fred Armisen age, famous quotes