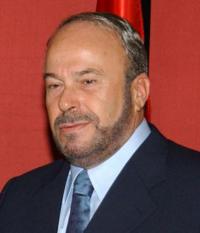 All sorts of artillery installations, rockets and tank units that are firing on civilians in Kosovo should be neutralized. If that means air strikes, then NATO should carry out air strikes.
Today in the era of globalization there is no such issue as borders between states of the same nation.
Organising free and fair elections is more important than the result itself.
I am hopeful that no one will forget what happened in Bosnia.
We are not only talking about waves of refugees coming to Greece, to Italy, and elsewhere. Destabilizing the Balkans means Lebanonization, and that means destabilizing all of Europe.
Albania is at risk and we are living in difficult times.
We have gone through everything as a nation - partition, dictatorship, and even anarchy.
Albania, Macedonia and Greece have managed to create a good partnership in the south of the Continent and are making progress in blocking the spread of the conflict. But any spillover could destroy this European-oriented partnership and create problems for the European Union countries themselves.
To see for themselves what the United States has been willing to undertake in the name of freedom. We should all visit Normandy. We should pay homage to those brave Americans who stormed ashore at Omaha Beach and gave their lives for the freedom of others.
Albanians are a nation of freedom fighters who know something about living under oppression.
People didn't vote left or right in the election. They voted for putting an end to all the primitive political history.
Thus, neither my government nor myself, personally, are without ideals and responsibilities.
If we didn't have the Albanian entrepreneurial spirit and financial support from the diaspora, this stupid political class would have destroyed the country by now.
Kosovo is too close to Europe. It is not only close to Albania, it is close to Greece, Italy, Germany and Switzerland, where there are still many Kosovo refugees. Spontaneous reactions could multiply.
Milosevic will never stop, because he is fighting for personal power in Serbia. The only way to stop him is cutting the functioning of his war machine. He is spending $1.7 million a day on his war machine in Kosovo.
That is why we wholeheartedly support the American-led effort to free the people of Iraq. And though we are a small country with a small military, we are proud to stand side by side with our allies in the fight to end the reign of terror in Baghdad.
Albania does not feel alone. It is part of the Partnership for Peace structures in NATO, and it will do what it can within that.
Most of Albania considers this Government to be legitimate.
To rebuild this country will take a long time but we have the mandate and the people support us.
If we follow the traditional way of thought, there will always be traditional enemies. Extremist circles from both sides will find causes to give rise to problems.

Who is person today and how old is Fatos Nano age, famous quotes