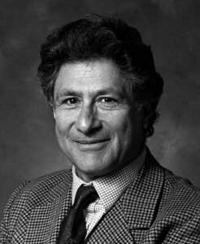 I have been unable to live an uncommitted or suspended life. I have not hesitated to declare my affiliation with an extremely unpopular cause.
Since the time of Homer every European, in what he could say about the Orient, was a racist, an imperialist, and almost totally ethnocentric.
The inner me was always under attack by authority, by the way my parents wanted me to be brought up, by these English schools I went to. So I've always felt this kind of anti-authoritarian strain in me, pushing to express itself despite the obstacles.
I don't myself believe in a two-state solution. I believe in a one-state solution.
I was one of the first people in the Palestinian world, in the late 1970s, to say that there is no military option, either for us or for them, and I'm certainly the only well-known Arab who writes these things - and who writes exactly the same things in the Arab press that I say here.
Until the June 1967 war I was completely caught up in the life of a young professor of English. Beginning in 1968, I started to think, write, and travel as someone who felt himself to be directly involved in the renaissance of Palestinian life and politics.
When you become a public figure, you still think, 'That's really not me; there's more to me than that.'

Who is person today and how old is Edward Said age, famous quotes