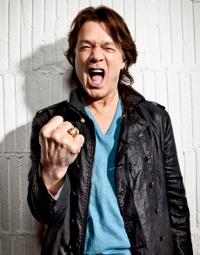 A guitar is a very personal extension of the person playing it. You have to be emotionally and spiritually connected to your instrument. I'm very brutal on my instruments, but not all the time.
I'm not a rock star. Sure I am, to a certain extent because of the situation, but when kids ask me how it feels to be a rock star, I say leave me alone, I'm not a rock star. I'm not in it for the fame, I'm in it because I like to play.
I have selective hearing.
We're musicians. We make music for a living. It's that simple. Nothing else matters.
When I'm home on a break, I lock myself in my room and play guitar. After two or three hours, I start getting into this total meditation. It's a feeling few people experience, and that's usually when I come up with weird stuff. It just flows. I can't force myself. I don't sit down and say I've got to practice.
There are really three parts to the creative process. First there is inspiration, then there is the execution, and finally there is the release.
Music is for people. The word 'pop' is simply short for popular. It means that people like it. I'm just a normal jerk who happens to make music. As long as my brain and fingers work, I'm cool.
I started doing all kinds of weird stuff on the guitar, which became part of my playing. I started doing harmonics and tapping on the guitar and pulling off strings and doing all this weird stuff that no one had ever done before.
The piano is a universal instrument. If you start there, learn your theory and how to read, you can go on to any other instrument.
It's always about the music, never about anything else.
I have pictures of me sitting in the racquetball court in my pajamas with an acoustic guitar, and Wolfgang is probably just two-and-a-half-feet tall. I'll never forget the day I saw his foot tapping along in beat! I knew then, I couldn't wait for the day I'd be able to make music with my son. I don't know what more I could ask for.
If you want to be a rock star or just be famous, then run down the street naked, you'll make the news or something. But if you want music to be your livelihood, then play, play, play and play! And eventually you'll get to where you want to be.
It's funny, when bands or younger musicians ask me: 'So, what does it take to make it?' Well, first explain to me what you mean by 'making it': Do you want to be a rock star or do you want music to be your livelihood?
I destroyed a lot of guitars trying to get them to do what I wanted, but I learned something from every guitar I tore apart, and discovered even more things. Things like if the string is not straight from the bridge saddle to the nut, you're going to have friction.
I can't read music. Instead, I'd do stuff inside the piano, do harmonics and all kinds of crazy things. They used to put me in these annual piano contests down at Long Beach City College, and two years in a row, I won first prize - out of like 5,000 kids!
Cancer is like a cockroach. It just comes back stronger. I'm tearing apart the immune system of the cockroach and seeing how it ticks. I've opened up my own pathology center.
The stainless-steel frets were a major breakthrough, because of the amount of playing and bending that I do. I have to get my guitars refretted every couple of months.
I don't feel a day older when it comes to my approach to music or what gets me off than when I was a teenager. I've always been into different kinds of stuff and when I play I like to play loud. I like my arm hairs to move and I like my body to vibrate 'cause I like the feel of it; I'm still a teenager at heart.
Imagine if Beethoven had a tape recorder. Then you'd know exactly what he meant. Maybe he meant 'Da da da da' instead of 'Boom boom boom boom!' Who knows?
When Van Halen started out, there was no path to fame. We just played what we liked. Even today it always comes down to the simplicity of rock and roll.

Who is person today and how old is Eddie Van Halen age, famous quotes