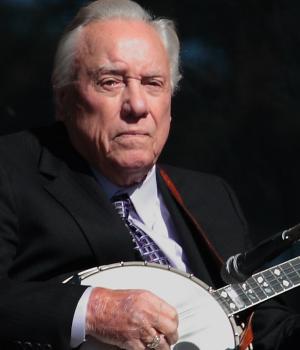 I don't think you'll ever get enough picking.
You know you can get gaudy with something, and they didn't do that. To me, I think it's very tasteful, well done, with the silver and gold and the engraving. I think it's very tasteful.
I enjoy doing new tunes. It gives me a little bit to perk up, to pay a little bit more attention.
I like drums, really, if they're under control.
I don't like to travel as much as I have in the past, but it's good for my soul to get to pick, especially with these good musicians and these guys that play so well.
I worked with a guy, I can't think of his name, him and his wife, and one of them had a saxophone and the other played drums. It wasn't a regular job but I did a few gigs around home with them.
She was a great lady. We raised three boys, were together as long as she lived, and now she's passed on.
He used to have a tent show, a little tent show, and I thought I was going to get a job working one year on the tent show, but he closed it down and I never got to go out there, but anyway, he had a sax and played drums.
I know she would want me to still do what I'm doing, because she kept me going a lot of times when I'd almost lose interest in getting out on the road.
That was one of the best, exciting things for me to play with them. They were very young and eager to go. I'd been playing with a band that was mostly old folks that had been together so long we couldn't do anything to excite each other.

Who is person today and how old is Earl Scruggs age, famous quotes