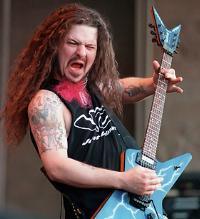 We still get those kind of cats coming out to our shows. Once you're into it, you're into it for a lifetime.
Music drives you. It wakes you up, it gets you pumping. And, at the end of the day, the correct tune will chill you down.
Musicians tend to get bored playing the same thing over and over, so I think it's natural to experiment.
Between the record companies being the way they are and the fact that people can just download one song instead of buying a whole album, it's hard to make a good living nowadays.
When I tried to play something and screwed up, I'd hear some other note that would come into play. Then I started trying different things to find the beauty in it.
My old man was a musician - that's what he did for a living. And like most fathers, occasionally he'd let me visit where he worked. So I started going to his recording studio, and I really dug it.
The worst advice I ever received from my dad was to play by the book. My old man used to flip out whenever I would try to branch out and do something different. Although he didn't do it on purpose, he really held me back in the beginning.
Always have a collection of your favorite CDs with you.
If you improvise a riff and the crowd immediately reacts to it, you know you're on to something.
Lessons didn't really work out for me, so I went to the old school, listening to records and learning what I wanted to learn.
My heroes were Eddie Van Halen - especially after Van Halen I, II, III, and IV - Randy Rhoads, Ace Frehley and dudes like that. My brother played drums and we jammed in the garage and started writing our own stuff.
The worst advice I ever received from my dad was to play by the book.
A lot of bands whine about the road and how tough it is.
I was lucky enough to get to see guys like Bugs Henderson, Jimmy Wallace, all those great Texas blues players.
Every song is different.
I used to skip school and paint my face with Ace Frehley Kiss make-up.
I was more influenced by players like Randy Rhoads and Eddie Van Halen than by the guys in southern rock bands.
I would just listen to records and learn what I could, then just roll it over and over and over.
It kills me when I see some metal band trying to pass themselves off as an 'alternative band.'
Pantera is the only band I've ever been in, and at the start we used to play covers to make a living.

Who is person today and how old is Dimebag Darrell age, famous quotes