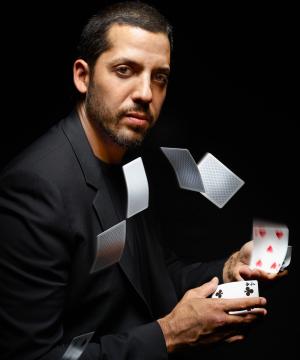 As a kid I used to hold my breath longer than anybody else, and then I heard stories about people accidently underwater for 45 minutes - how do you recover from that? It's not a miracle. Something allows us to survive.
I was obsessed with the idea of fasting and isolation.
Magic's an art where you use slight of hand or illusion to create wonder. And I was just intrigued with that idea.
In truth, the only restrictions on our capacity to astonish ourselves and each other are imposed by our own minds.
Basically, I was a kid growing up with a single mother in Brooklyn.
I hope people remember me as a guy who brought magic to the people. You know, pushed the boundaries of wonder.
Whether you're shuffling a deck of cards or holding your breath, magic is pretty simple: It comes down to training, practice, and experimentation, followed up by ridiculous pursuit and relentless perseverance.
My mother encouraged it so much. She was so supportive. Even if as a kid, I would do the dumbest trick, which now that I look back on some things, she would love it, she would say that's amazing, or if I'd make the ugliest drawing, she would hang it up. She was amazing.
I believe that fear of life brings a greater fear of death.
I thought instead of burying myself under dirt, I'd bury myself under water so everybody could see that you're there.
But as they say about sharks, it's not the ones you see that you have to worry about, it's the ones you don't see.
We are all capable of infinitely more than we believe.
I just believe that the feeling of wonder is amazing. I am pushing myself as far as I can humanly push myself... I can only hope for the best and expect the worse.
I consider myself a showman, and I love magic, and I love art, and I love performance, and they're all separate.
I think anybody can do any of these if they train. I don't recommend it, but anybody could do it if there was a need.
I think everything I do is normal, not paranormal but normal. It's using the power of the mind to achieve whatever we can endure.
I think that when Evel Knievel crashed over the fountain at Caesar's, it kind of gave you a credibility and then anticipation for everything he did.
I'd go to Coney Island to hang out, and I saw a magician doing a rope trick on the boardwalk. I was fascinated. I guess that's how it started.
My mother was a teacher, and when she wanted to show me art and literature and science, she'd take me to museums, parks and free exhibitions.
My only fear is the unknown.

Who is person today and how old is David Blaine age, famous quotes