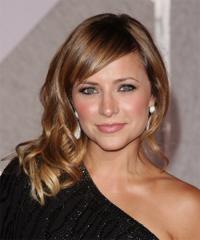 I try to do something active everyday. Liking what you're doing makes working out enjoyable.
I grew up dancing, and for a while in college, I was a gym rat. I finally realized... I'm going to create a little more balance in my life and make exercise something that I enjoy doing. So I went back to dance when I started doing more musical theatre, and I've just found that it's the best thing that works for my body.
I don't care how late it is, I will not go to sleep without washing my face.
Carol Burnett probably had the biggest influence on me as kid. Although I was very young and watched her a lot in reruns, I was mesmerized by the way she transformed, by her physical comedy and the rolling laughter from the live studio audience. I loved her most as Scarlett O'Hara and her well known Cleaning Lady character.
I don't have siblings, which is probably the biggest reason why my parents were able to give the attention to my career that they did.
I love Neil Patrick Harris. I've always been a big fan of his - he was my first TV crush.
When in times of turmoil and breakup, do not cut or shave your head, because it will never end well.
I did my fair share of stupid stuff in high school, like anyone. I had a healthy fear of my parents, and I certainly never wanted to disappoint them. That would be the worst thing I could ever do.
It's true that my mom loved it when I played Joanie Cunningham in the musical 'Happy Days,' but I think she finally realized I am never going to do 'Oklahoma!'
My bedtime was 8 P.M. But on 'Cosby' nights, I got to stay up until 8:30. Real big deal. This is when they could afford to do a completely different title sequence in TV every year. I always looked forward to that. It was like a mini musical at the top of the show. My favorite was the Top Hat fancy version.
I don't like kissing on camera. It's bad enough to be caught kissing by your parents. But when you have a whole crew watching you, it's a little weird.
I took my first acting class at age 6 because I found out that's what Carol Burnett was doing - acting. Also she had an imaginary friend as a kid and went to UCLA, two things we have in common. I will always admire her and hope one day, I can make someone laugh a fraction as hard as she's made me bellyache.

Who is person today and how old is Christine Lakin age, famous quotes