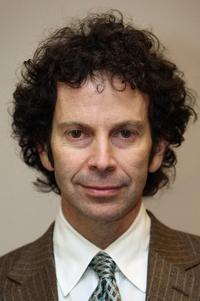 I think that people have expectations of themselves and other people that are based on these fictions that are presented to them as the way human life and relationships could be, in some sort of weird, ideal world, but they never are. So you're constantly being shown this garbage and you can't get there.
I don't think screenwriting is therapeutic. It's actually really, really hard for me. It's not an enjoyable process.
I think of myself as a guy who tries to write screenplays and now has tried to direct one. Anything more than that is meaningless and it gets in the way of being a real human being.
We try to organize the world, which isn't organized the way our brains want to organize it. We tell stories about the people in our lives, we project ideas onto them. We project relationships with people, we make our lives into stories. I don't think we can avoid doing that.
I do have, at different times, a certain kind of self-consciousness in the world, an insecurity.
I feel like I want to keep moving toward idiosyncracy. Personal, personal, personal.
I was trying to figure out what a memory feels like.
I can talk endlessly about characters, or why someone did this or that, and what that dynamic and interaction is. I really love it, and I think that actors really respond positively to the fact that I like to talk about that stuff, because I'm not sure that all directors do.
You are what you love. Not what loves you.
I do have some theatrical background. I've written plays and seen plays and read plays. But I also read novels. One thing I don't read is screenplays.
Constantly talking isn't necessarily communicating.
I want to try it to see what it's like and see what my stuff looks like when I take it from inception to completion.
I hate a movie that will end by telling you that the first thing you should do is learn to love yourself. That is so insulting and condescending, and so meaningless. My characters don't learn to love each other or themselves.
There's no way to approach anything in an objective way. We're completely subjective; our view of the world is completely controlled by who we are as human beings, as men or women, by our age, our history, our profession, by the state of the world.
When I'm writing, I'm trying to immerse myself in the chaos of an emotional experience, rather than separate myself from it and look back at it from a distance with clarity and tell it as a story. Because that's how life is lived, you know?
There's this inherent screenplay structure that everyone seems to be stuck on, this three-act thing. It doesn't really interest me. To me, it's kind of like saying, 'Well, when you do a painting, you always need to have sky here, the person here and the ground here.' Well, you don't.
As a writer, or as a filmmaker, you have to present yourself, and part of what yourself is is what you're interested in, or what you think is funny, or what you think is sad, or what you think is horrible.
I have a personality that tends to be somewhat compulsive, and I do tend to think in a circular way. I dwell on the same things over and over and I try to figure out different ways of looking at the same issue.
It occurred to me that every work of art is a synecdoche, there's no way around it. Every creative work that someone does can only represent an aspect of the whole of something. I can't think of an exception to that.
I like titles that are a little difficult, because it's kind of counterintuitive.

Who is person today and how old is Charlie Kaufman age, famous quotes