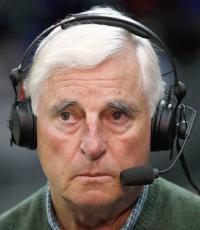 The will to succeed is important, but what's more important is the will to prepare.
I don't have to wait until the next morning to regret something I did that was kinda dumb.
I think that we as a people are always prone to think about, well, tomorrow will be a better day. Well, why will it be a better day? And I think the more that we believe in doing things better, doing the right thing rather than hoping that that's going to happen, let's make it happen.
People change over the years, and that changes situations for good and for bad.
When I first started coaching, one of the worst things that I think I heard was 'It will be O.K.' I would wonder, 'How the hell is it going to be O.K.?' The worst word in the English language is 'hope.'
I think that it's perhaps harder to learn from victory than it is from defeat. I think that we don't want defeat. We don't want defeat in sport. We don't want defeat in life. How are we going to be beaten? All right. We have to deal with those things. What's going to cause us to lose the game, whatever the game might be?
If I were involved with the NBA, I wouldn't want a 19-year-old or a 20-year-old kid to bring into all the travel and all the problems that exist in the NBA. I would want a much more mature kid. I would want a kid that maybe I've been watching on another team, and now he's 21, 22 years old instead of 18 or 19, and I might trade for that kid.
When my time on earth is gone, and my activities here are passed, I want they bury me upside down, and my critics can kiss my ass!
My dad was a very quiet person, and unbelievably tough. But my grandmother gave me my first look at negative thinking to bring about positive results. When I was just a little guy, anytime I came to my grandmother and said I wish for this or that, Grandma would say, 'If wishes were horses, beggars would ride.'
I watched the guy that hits a home run, and he comes across the plate and he points skyward, like thanking for the help from the Almighty to hit the home run. And as he does that, I say to myself, 'God screwed the pitcher.' And I don't know how else you look at it.
And I would be the first to admit that probably, in a lot of press conferences over the time that I have been in coaching, indulging my own sense of humor at press conferences has not been greatly to my benefit.
I have always maintained that in basketball the importance of the mental to the physical is about four to one.
You don't play against opponents, you play against the game of basketball.
All the years I coached, we sent a card to every professor for each kid I had, and I was able to keep track on a daily basis who cut class or who was dropping a grade average. What I did was bring that kid in at 5:00 in the morning, and he would run the stairs from the bottom to the top until I told him to quit.
Mental toughness is to physical as four is to one.
Walking has been ridiculous in college basketball the past 15 years.
All of us learn to write in the second grade. Most of us go on to greater things.
I've always felt that, you know, the Almighty has a lot of things to do other than help my basketball team.
During my 40-year coaching career at West Point, Indiana and Texas Tech, my teams reached the Final Four on five occasions, winning the national championship three times.
As his team prepares, a coach's entire being must be concentrated on winning games.

Who is person today and how old is Bobby Knight age, famous quotes