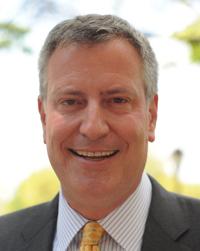 I've always had a very positive relationship with the municipal labor unions - a respectful relationship.
Everyone I knew was a Red Sox fan. Living up there in 1967 - the Impossible Dream season - that moment was incredibly compelling. I just naturally gravitated to the team. Nineteen seventy-five was arguably the greatest World Series of all time.
I have an activist's desire to improve people's lives.
There is nothing wrong with listening. You can listen to people; you can hear people's concerns. You can keep an open mind and still be perfectly strong.
I think you can be smart and directed and focused, without being obnoxious, and get plenty done.
I'm someone who does not like a bunker mentality and does not like groupthink.
My professional life has been about public service. My personal life I define very intently through my family.
As N.Y.C. Public Advocate, I released a report that showed that stop-and-frisks of African Americans in 2012 were barely half as likely to yield a weapon as those of white New Yorkers - and a third less likely to yield contraband. Despite this evidence, the vast majority of those stopped are young black and Latino men.
I didn't set out with the notion of running for elective office; it sort of grew over time. And I honestly at times questioned if progressive change can be effected through elected office.
I have my loyalty to the team of my youth. Everyone I knew was a Red Sox fan. The team that I grew up with was constantly the underdog but managed to prevail.
While this has been a private part of my family's life, it is now clear a media story will soon emerge. My father tragically ended his life while battling terminal cancer in 1979.
At a certain point, particularly in his third term, Mayor Bloomberg lost touch with the people he was serving.
Going back to high school and college, I believed I would be involved in public service. I literally could not conceptualize anything else.
I am very much a Red Sox fan; I can name you more players than you could possibly imagine. It's just part of who I am.
I love the MLB app, because I'm a pretty obsessed baseball fan.
I think a lot of the best ideas come from the grassroots; I'm someone who does not like a bunker mentality and does not like groupthink.
I think unionization is good public policy. I think when families secure their economic future, that's good for everyone.
My parents were divorced when I was young. I was really brought up by my mother's side of the family.
There are families of every kind. I think a lot of people are struggling to make sense of their identity in a very complicated world.
Clearly, Mayor Bloomberg did some things right. I think he did a very good job on public health. He did a very good job on environment. I think he was right to achieve mayoral control of education. I don't think he then applied it the right way.

Who is person today and how old is Bill de Blasio age, famous quotes