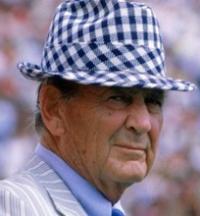 Nearly every coach I've talked with tells me that the attention you get from media and other people is the thing you miss most. I don't know if that's right.
I'll put you through hell, but at the end of it all we'll be champions.
Never quit. It is the easiest cop-out in the world. Set a goal and don't quit until you attain it. When you do attain it, set another goal, and don't quit until you reach it. Never quit.
Back 12 years ago, when Dr. Mathews was president here, we had a plan that when I got ready to quit, we'd bring a certain guy in and he'd take over that day and I'd leave. But as time wore on, I realized that wouldn't have been good at all.
I've had many a player tell me all through high school and right up until signing day that they were coming to Alabama, then they signed with somebody else.
If we'd beaten 'em, I wouldn't be going out.
I plan on staying at Alabama for the rest of my career. I guarantee that I'll be here for you through it all, regardless of what happens.
I think I'm telling the truth. I sat by Ray Perkins at the Hall of Fame dinner in New York, and at that time he didn't know he was our coach and I didn't either.
I didn't have a thing to do with picking a coach, and didn't want to. But I didn't think they'd pick one I didn't like.
I hope to get out before they start football next year.
The fun never goes out, but it changes with the years, with winning and losing.
Georgia Tech beat us and Mississippi Southern tied us last year, and Texas beat us after we had the game won. We only played about five games the way we were capable of playing and lost one of those.
I can remember loving to recruit. I knew I was going to do my best. But traveling and recruiting doesn't appeal to me any more. It's not as much fun as it used to be.
I want to make sure I don't interfere with the success of that team next year. I don't see any way I could go to practice like most of 'em do, and not hurt the team. I'd go nuts if I tried doing that.
If I miss coaching that much, I could go to some little school where they didn't recruit, where all the kids wanted to go. I believe I could find somewhere to coach.
It's been years since I've had a real input in the game anyway. For this game, I've just tried to keep all the other stuff away from the players and coaches.
I'm happy with the coach we have. I think any one of the ones I asked them to consider would've been good.

Who is person today and how old is Bear Bryant age, famous quotes