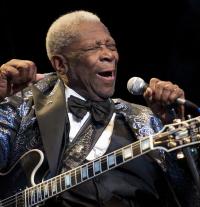 B. B. King quotes

I've put up with more humiliation than I care to remember.
I don't try to just be a blues singer - I try to be an entertainer. That has kept me going.
I never use that word, retire.
I started to like blues, I guess, when I was about 6 or 7 years old. There was something about it, because nobody else played that kind of music.
I'm no good with chords. I'm horrible with chords.
There are so many sounds I still want to make, so many things I haven't yet done.
If you can't get your songs to people one way, you have to find another.
I don't care for the music when they're talking bad about women because I think women are God's greatest gift to the planet - I just like music.
Everybody wants to go to Heaven, but no one wants to die to get there!
The blues was bleeding the same blood as me.
I bought my first electric guitar when I moved to Memphis; a Gibson with a DeArmond pickup which I used with a small Gibson amplifier.
I've said that playing the blues is like having to be black twice. Stevie Ray Vaughan missed on both counts, but I never noticed.
Jazz is the big brother of the blues. If a guy's playing blues like we play, he's in high school. When he starts playing jazz it's like going on to college, to a school of higher learning.
The beautiful thing about learning is nobody can take it away from you.
Growing up, I was taught that a man has to defend his family. When the wolf is trying to get in, you gotta stand in the doorway.
We all have idols. Play like anyone you care about but try to be yourself while you're doing so.
When people treat you mean, you dislike them for that, but not because of their person, who they are. I was born and raised in a segregated society, but when I left there, I had nobody I disliked other than the people that'd mistreated me, and that only lasted for as long as they were mistreating me.
I've been married twice. Most women would rather not be married to a traveling blues singer.
When I do eventually drop, I pray to God that it'll happen in one of three ways. Firstly, on stage or leaving the stage, then secondly in my sleep. And the third way? You'll have to figure that out for yourself!
A lot of people believe what other people say.

Who is person today and how old is B. B. King age, famous quotes