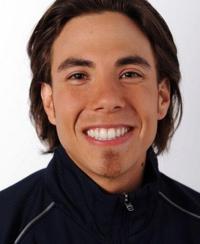 We all naturally want to become successful... we also want to take shortcuts. And it's easy to do so, but you can never take away the effort of hard work and discipline and sacrifice.
I rolled the second car that I ever owned, a Toyota 4 Runner. This was winter in Colorado, two weeks before the 2002 Olympic trials. I was driving in the outside lane, and my rear tire caught some black ice, and we totally turned sideways to the point where we were heading right toward the median.
My life has always been compartmentalized into different aspects. I have my speed skating Olympic pursuits, I have my personal life and have my business life and have my entertainment - TV - Hollywood - whatever have you - always compartmentalizing every aspect of my life.
It is not up to me whether I win or lose. Ultimately, this might not be my day. And it is that philosophy towards sports, something that I really truly live by. I am emotional. I want to win. I am hungry. I am a competitor. I have that fire. But deep down, I truly enjoy the art of competing so much more than the result.
Do I feel any pressure as the most decorated Winter Olympian in American history? None at all. The only pressures that I know I face are those of how to pay it forward: How can I continually make a positive impact in people's lives, help others achieve their dreams, create their own Olympic mindset, creating champions within themselves?
It's important to be driven and have goals. You want an independent woman who knows what she wants and isn't afraid to go after it. It's attractive to me when a woman is doing what she loves. It makes me want to know more.
I can look into someone's eyes and feel like I know her better, versus a phone call, where you can't get that same type of emotion. That's why text messaging gets you in trouble: You can't bond, and emoticons explain only so much.
I wanted to go back on 'Dancing With the Stars,' I did it. One of my favorite shows is 'Hawaii Five-0.' I went on, guest starred. I wanted to be in a film, did 'Tasmanian Devils' in Vancouver. Wanted to host a show, boom, did it.
One things guys have to remember is consistency... You can't make up for three years of eating poorly in just one workout.
It's about having an active lifestyle, staying healthy, and making the right decisions. Life is about balance. Not everybody wants to run a marathon, but we could all start working out and being active, whether you walk to work or take an extra flight of stairs.
Japan, not only a mega-busy city that thrives on electronics and efficiency, actually has an almost sacred appreciation of nature. One must travel outside of Tokyo to truly experience the 'old Japan' and more importantly feel these aspects of Japanese culture.
I am a believer in nutrient timing and supplementation, through 8Zone. I love eggs, apples, wild fish, leafy greens, brown rice, pasta, oatmeal, home grown Washington Potatoes, and cooking with coconut and olive oils.
U.S. Speedskating has been riddled with problems since when I started my career, and we were always able to look past that. When it came down to performing on the ice, regardless of funding issues, we were always able to make it happen. And that's what it's all about.
I know that BMW is now a sponsor of the USOC - of the United States Olympic Committee - so they offer the use of their aerodynamic speed-tunnel for testing and such for the athletes, which is a great advantage. But to be honest with you, I'd rather have a free car!
My life has always been with my dad. Since I can remember, I was raised by my father my entire life. So he's kind of been that mom and father figure - always.
When there's somebody racing side-by-side, when somebody's right next to me and they're pushing and we're both tired, we're both fatigued, I want to be able to beat them mentally.
I love to shop. Clothes, electronics, and I love jewelry, especially yellow gold.
Broadcasting is definitely in my cards for the future, and I'm determined to work hard at it - to perfect it and create my style and niche.
I don't have great running technique, but I like to run. I've heard from countless people that the last six miles of the marathon is all mental. But what better city to have this in than New York City where there are millions of people there supporting you?
Every Olympic athlete prepares differently. For me, I am 100 percent into the sport. And if I decide to really make a crucial career decision to say, 'This is something I want to do,' I want to leave no stone unturned in my preparation.

Who is person today and how old is Apolo Ohno age, famous quotes