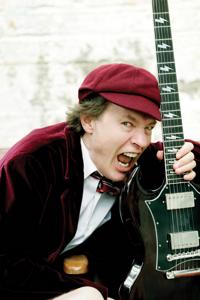 I saw Deep Purple live once and I paid money for it and I thought, 'Geez, this is ridiculous.' You just see through all that sort of stuff. I never liked those Deep Purples or those sort of things. I always hated it. I always thought it was a poor man's Led Zeppelin.
A lot of people say, 'AC/DC - that's the band with the little guy who runs around in school shorts!'
I just go where the guitar takes me.
Yes, we're still five little people with a noisy attitude.
A lot of times you'll hear bands and it's a different sound coming out than what's on stage. Because you can clean it up through a PA and make it sound completely different than what they really sound like.
I'm sick to death of people saying we've made 11 albums that sounds exactly the same, Infact, we've made 12 albums that sound exactly the same.
Every guitarist I would cross paths with would tell me that I should have a flashy guitar, whatever the latest fashion model was, and I used to say, 'Why? Mine works, doesn't it? It's a piece of wood and six strings, and it works.'
There are all sorts of cute puppy dogs, but it doesn't stop people from going out and buying Dobermans.
When I'm on stage the savage in me is released. It's like going back to being a cave man. It takes me six hours to come down after a show.
I remember one of the first gigs I played with that amp was at a local church. They wanted someone to fill in with the guitar and my friend say, 'Ah, he can play.' And so I dragged the amplifier down and started playing and everybody started yelling 'turn it down!'
That's usually what happens with AC/DC: you make an album, and then you're on the road flat out. And the only time you ever get near a studio is generally after you've done a year of touring.
We're a rock group. we're noisy, rowdy, sensational and weird.
Soloing was pretty easy for me because it was probably the first thing I've ever done.
I never bothered with cars. I was probably one of the few kids in school who didn't run around with hot-rod magazines. As I would be at home fiddling with my guitar, they would be fiddling with a car engine.
My part in AC/DC is just adding the color on top.
I honestly believe that you have to be able to play the guitar hard if you want to be able to get the whole spectrum of tones out of it. Since I normally play so hard, when I start picking a bit softer my tone changes completely, and that's really useful sometimes for creating a more laid-back feel.
With AC/DC, we've always started with rock, and we've just kept it going. The critic's view is always, 'They just made an album and it's the same as the last one.' I'll have fifteen of them, anytime.
Actually, because I'm so small, when I strike an open A chord I get physically thrown to the left, and when I play an open G chord I go right. That's how hard I play, and that's how a lot of my stage act has come about. I just go where the guitar takes me.
I wouldn't know any newer bands. We're past the pimple stage.

Who is person today and how old is Angus Young age, famous quotes