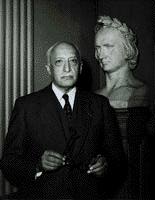 A successful marriage is an edifice that must be rebuilt every day.
Self-pity comes so naturally to all of us. The most solid happiness can be shaken by the compassion of a fool.
A happy marriage is a long conversation which always seems too short.
Growing old is no more than a bad habit which a busy person has no time to form.
If you create an act, you create a habit. If you create a habit, you create a character. If you create a character, you create a destiny.
Conversation would be vastly improved by the constant use of four simple words: I do not know.
An artist must be a reactionary. He has to stand out against the tenor of the age and not go flopping along.
Smile, for everyone lacks self-confidence and more than any other one thing a smile reassures them.
We appreciate frankness from those who like us. Frankness from others is called insolence.
The effectiveness of work increases according to geometric progression if there are no interruptions.
We owe to the Middle Ages the two worst inventions of humanity - romantic love and gunpowder.
Business is a combination of war and sport.
Without a family, man, alone in the world, trembles with the cold.
The first recipe for happiness is: avoid too lengthy meditation on the past.
Memory is a great artist. For every man and for every woman it makes the recollection of his or her life a work of art and an unfaithful record.
The most important quality in a leader is that of being acknowledged as such. All leaders whose fitness is questioned are clearly lacking in force.
There are certain persons for whom pure Truth is a poison.
Men and women are not born inconstant: they are made so by their early amorous experiences.
People are what you make them. A scornful look turns into a complete fool a man of average intelligence. A contemptuous indifference turns into an enemy a woman who, well treated, might have been an angel.
Old age is far more than white hair, wrinkles, the feeling that it is too late and the game finished, that the stage belongs to the rising generations. The true evil is not the weakening of the body, but the indifference of the soul.

Who is person today and how old is Andre Maurois age, famous quotes