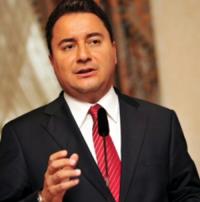 Turkey's energy bill due to imports will fall with the increase in use of renewable energy sources. We have no control over the prices of petroleum and natural gas.
Turkey's economy is powerful enough to tackle tough times.
We have been talking with leaders: Change is coming; you can no longer have a closed regime with an open society - satellites, social media, the Internet - you have this kind, this kind of society moving forward, and you are running this closed regime; this is not sustainable. This cannot continue.
The fast fish, not the big fish, eats the small fish.
The E.U. initially decided to end the isolation of Turkish Cyprus, to balance the accession of Cyprus. But the E.U. has not carried through on its promise.
Islam and democracy can function together.
Whatever the scenario, the dynamism of developing nations, their demographics and competitive power are great sources for superiority.
Turkey is going through an incredible economic, political and social transformation. What is most important is that Turkey has been the owner of this transformation. Ownership has been the key to success.
A country which has a population 99% as their faith in Islam can also be a country which are subscribing to the universal values of the E.U.
Greece is not an easy country to do business in.
Leave history to historians.
Northern Iraq has become, economically, a natural extension of Turkey.
Openly speaking, the only formula that will save Greece's future is more trade with Turkey and more investment with Turkey.
Population is a strong driver of the economy as well as the quality of the labor force.
'The Economist' is a biased organization.
Those looking from Europe see Turkey as an economic success, whereas others from the Middle East see Turkey as a democratic success.
Turkey does not have an official exchange rate target.
Turkey is widely envied while there are very serious troubles in the world economy.
Turkey shares Europe's fundamental values of democracy and the rule of law.
Turkey will not let Turkish territory or airspace be used in any activity that could harm the security or safety of Syria.

Who is person today and how old is Ali Babacan age, famous quotes