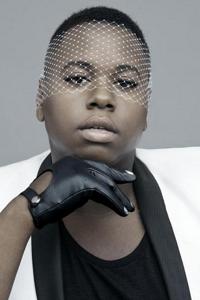 Other than my sexuality, I am vulnerable regarding my physical appearance, as I am not what people considered ideal by most standards. For the entertainment business, I am not the body type of what is typically cast for television or movies.
It will be impossible for us to eradicate HIV as long as any corner of the world is cut off from the education and services that we know helps stop the spread of this disease.
On 'Glee,' we often tackle the tough topics that young people face - in fact, my recurring character, Wade 'Unique' Adams, is a transgender teenager who finds herself navigating a lot of the same problems many young people face around the globe.
Thanks to President Barack Obama, under the Affordable Care Act, millions more people will be eligible for health insurance, including many people with HIV.
I love Frank Ocean. We're going to get married. In true life, we should get married.
I want to play the mean girl one day - or the mean gay!
I tend to hide behind my status of being a diva; it's easy for me to embrace that part of me and seek confidence by being a bit outrageous at times.
You don't think that mean people can be funny, and Jane Lynch is the epitome of that. If there could be, like, a gay version of 'Mean Girls,' I'd totally be in it.
I always wanted to be on 'Glee.' As soon as the pilot aired, I said I needed to be on the show.
I've always known that I wanted to sing, and I wanted to dance, and I wanted to act.
I grew up about 30 minutes north of Boston in a town that was a virtual melting pot - I was exposed to all different backgrounds, cultures, and religions, fueling my personal interests in global issues.
Singing is my passion, regardless of anything else that I've ever done. That's the one thing that no one can ever take away from me is my voice, and that is what I really want to do.

Who is person today and how old is Alex Newell age, famous quotes