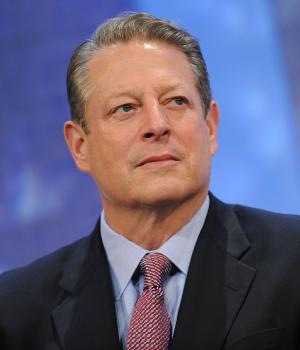 As human beings, we are vulnerable to confusing the unprecedented with the improbable. In our everyday experience, if something has never happened before, we are generally safe in assuming it is not going to happen in the future, but the exceptions can kill you and climate change is one of those exceptions.
Civil disobedience has an honourable history, and when the urgency and moral clarity cross a certain threshold, then I think that civil disobedience is quite understandable, and it has a role to play.
I take no pleasure in the fact that the scientific predictions I've relayed to popular audiences turn out to be true.
As president, I will bring all the parties and stakeholders together. I am going to come up with a solution that respects the environment and does not cause an upheaval in the economy.
I think the cost of energy will come down when we make this transition to renewable energy.
When you have the facts on your side, argue the facts. When you have the law on your side, argue the law. When you have neither, holler.
I think that more diversity is a good thing, and fresh points of view articulated by people who are committed to excellence in journalism is a beneficial change in the American media landscape.
If you want your energy bills to go up, you should support an ever greater dependence on foreign oil, because the rate of new discoveries is declining as demand in China and India is growing, and the price of oil and thus the price of coal will go sky high.
I did very extensive diligence on Al Jazeera English, the network from which Al Jazeera America is going to be derived, and it's really very clear that they have long since established a reputation for excellence and integrity and objectivity.
I have always been fascinated with those who try to look over the horizon and see things that are coming at us.
The entire North Polar ice cap is disappearing before our very eyes. It's been the size of the continental United States for the last 3 million years and now 40 percent is gone and the rest of it is going.
Population growth is straining the Earth's resources to the breaking point, and educating girls is the single most important factor in stabilizing that. That, plus helping women gain political and economic power and safeguarding their reproductive rights.
Airplane travel is nature's way of making you look like your passport photo.
I'm naturally an optimist, but my basis for hope is rooted in my understanding of human nature.
In digital era, privacy must be a priority. Is it just me, or is secret blanket surveillance obscenely outrageous?
CO2 is the exhaling breath of our civilization, literally... Changing that pattern requires a scope, a scale, a speed of change that is beyond what we have done in the past.
Today we're dumping 70 million tons of global-warming pollution into the environment, and tomorrow we will dump more, and there is no effective worldwide response. Until we start sharply reducing global-warming pollution, I will feel that I have failed.
When people flirt with despair about the future, they are less likely to take the actions necessary to safeguard it, focusing instead on the short-term.
A president who breaks the law is a threat to the very structure of our government.
I pledge to you today that as president, in my first budget, I will introduce the largest increase in special education ever.

Who is person today and how old is Al Gore age, famous quotes